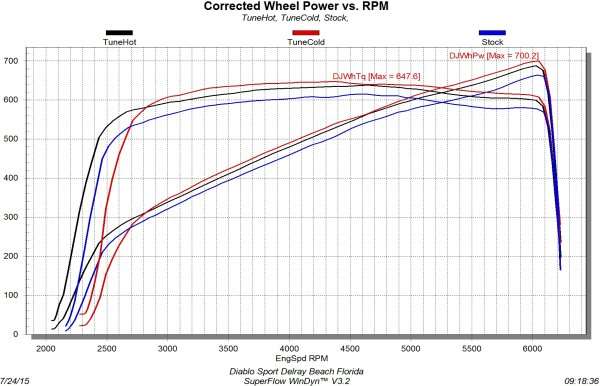 How Much Power Does the Hellcat Challenger Lose When Hot?

We discussed the new Diablosport tuning packages for the Dodge Challenger and Charger with the SRT Hellcat Hemi yesterday and while we focused on the big power levels reached with the engine tuning upgrade, another interesting piece of information was how much power the blown beast loses when getting a little warm.
Advertisement

If you have spent much time at the drag strip in the past year, you have almost certainly seen some supercharged cars like the Ford Mustang Shelby GT500, the Chevrolet Camaro ZL1 or the Dodge Challenger and Charger SRT Hellcat models in the garage area with bags of ice sitting on the top of the engine. The goal is to cool the supercharger housing down as much as possible, as the engine can make better power when the air entering is as cool as possible.

Fortunately, thanks to the people at Diablosport, we have an idea of how much power the Hellcat Challenger loses when the engine is very hot.

Tuned Hellcat Power Numbers
Included with the information on the new Diablosport tuning packages for the Dodge Hellcat Challenger and Charger was a dyno chart that showed the horsepower and torque graphs of the supercharged 6.2L Hemi with and without the high performance engine tune.

In stock form, the Hellcat Challenger being tested and tuned by Diablosport made right around 660 horsepower at the rear wheels and when the 93 octane performance tune was added, that number jumped up to 700.2 horsepower. That is an increase of 40 rear wheel horsepower in ideal conditions including a nice cool engine, but what about less than ideal conditions?

Diablosport also made a good dyno run with the same car and the same tune, but with the engine running at the upper end of the temperature gauge. The company didn’t state the exact “hot numbers”, but based on the dyno chart, the wheel horsepower dropped from 700 to somewhere in the area of 684-688, based on the correct dyno chart above. At 685 rear wheel horsepower, the tuned Hellcat Hemi is losing 15 horsepower simply from running engine running hotter than an ideal temperature. Mind you, we aren’t talking about an overheating engine – this is just the difference between an engine that has been run for an hour and an engine that has been sitting, cooling down for an hour.

Based on this, it is very clear that packing the top of your Hellcat Hemi engine in ice does make a difference – with the output dropping by 2% in a very hot engine. These are for a tuned engine, so there is a chance that an untuned engine will become even more conservative in terms of the power output when the engine gets hot, so next time you go to the track with your Hellcat Hemi Challenger or Charger – make sure to bring bags of ice and towels to absorb the runoff as the ice melts.