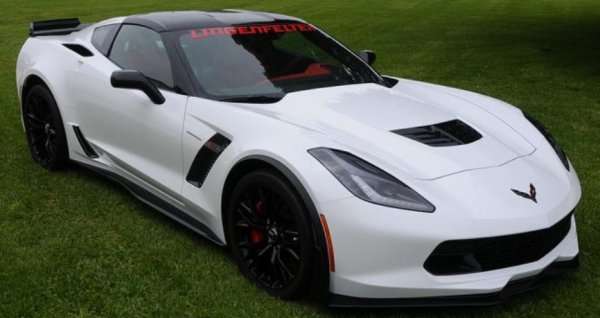 How Lingenfelter Boosts Up the C7 Corvette Z06 on a Budget

If you are looking to add a bunch more power to your 2015 Chevrolet Corvette Z06 without spending money that could effectively buy a new compact car, the folks at Lingenfelter Performance Engineering has you covered with their new C7 Z06 Stage 1 kit – which adds big power with a relatively small price tag.
Advertisement

The 2015 Chevrolet Corvette Z06 is the most powerful production road car from General Motors ever with a new supercharged LT4 engine that puts out 650 horsepower and 650lb-ft of torque. When combined with the high tech suspension system, the carbon ceramic brakes and the lightweight, aerodynamic body, the LT4 engine helps to make the C7 Z06 the most track capable Corvette of all time (according to GM), but for some people, 650hp and 650lb-ft of torque just isn’t enough.

For those folks, there are a handful of reputable tuning shops around the United States offering performance packages for the new Z06 and the LT4 V8, but one of the most reputable – Lingenfelter Performance Engineering - just released a Stage 1 kit for the C7 Z06 that adds big power. Most importantly, unlike many of the other packages for the new Corvette Z06 on the market, the Lingenfelter package for the newest super-Vette is surprisingly affordable.

LPE C7 Z06 Stage 1
The Lingenfelter Stage 1 kit for the 2015 Corvette Z06 adds the LPE LT1/LT4 dry sump crankshaft damper, an LPE 9.2 inch overdrive supercharger pulley, a 100mm idler pulley, a new supercharger drive belt, a 170 degree thermostat, a high flow air filter and a hand programmer with the LPE tune to bring everything together. The result of these modifications and the LPE tune is an increase of 70 horsepower and 80lb-ft of torque – bringing the total outcome to 720 horsepower and 730lb-ft of torque.

Most importantly, the Lingenfelter Stage 1 package for the C7 Corvette Z06 costs just $3,995, and that includes installation, chassis dyno before and after the build, a 1-year, 12,000 mile warranty on the LPE parts and a four wheel alignment, full detailing and a full tank of 93 octane fuel.

The Lingenfelter Stage 1 kit for the 2015 Chevrolet Corvette Z06 doesn’t pack quite as much power or the unique exterior upgrades that we see from some other tuners, but the LPE Stage 1 kit offers incredible bang for your buck. Some might think that it is hard to call a $4,000 performance package a budget package, but for 70 horsepower and 80lb-ft of torque – installed – that is a smokin’ deal.

Ultimately, the fact that it doesn’t include unique body panels helps to keep the cost down and with 720, there aren’t many cars on the road that will hang with the LPE Stage 1 Corvette Z06.