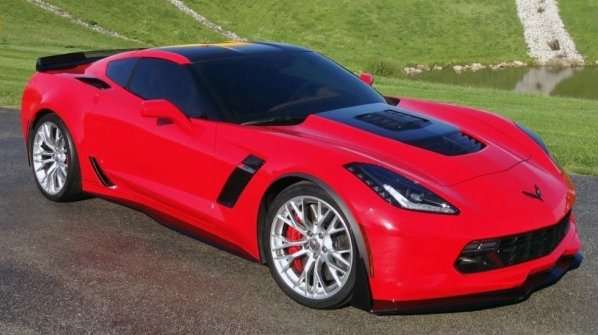 The 2015 Chevrolet Corvette Z06 is the most track capable General Motors vehicle of all time and the LT4 V8 with 650 horsepower and 650lb-ft is the heart of the beast, but for those C7 Z06 owners who feel the need for way more power – the new Callaway upgrade kit for the newest super-Vette could be the answer.
Advertisement

The new Callaway Corvette Z06, which is based on the 2015 Chevrolet Corvette Z06, was officially introduced a few months back at the National Corvette Museum, but the exact power numbers were not available. Those numbers are now available, and they are pretty impressive.

The 2015 Corvette Z06 with the Callaway package offers 757 horsepower and 777lb-ft of torque – all with a surprisingly short mod list and a pretty reasonable price.

The Callaway Corvette Z06 Package
The new high performance package from Callaway for the 2015 Corvette Z06 includes a variety of features, but only a few of them actually help to make more power. The key component of the package is the Callaway GenThree supercharger package, which includes a super-efficient triple element intercooler system and a unique hood design that allows the supercharger housing to extend up through an opening in said hood. This hood design looks awesome, but it also allows the air flowing over the hood to help cool the housing. When coupled with the triple element intercooler, the Callaway system goes to great lengths to cool the compressed air entering the engine as much as possible. As a result, this system is easier on the engine with lower intake air temperatures, thus making more power.

Affordable High Performance
The 2015 Chevrolet Corvette Z06 1LZ (base model) with the 7-speed manual transmission carries a price of $80,990 including tax and title, so if you paid website price for a new Z06 at your local Chevy dealership, that is what you would pay. When you add in the $16,995 of the Callaway package, you could have a 757 horsepower Corvette that would have cost you right around $97,985.

For that price, you get all of the goodies that we mentioned to allow the LT4 to make 757hp and 777lb-ft of torque, but it also includes carbon fiber engine covers, and cold air intake setup, embroidered floor mats, aluminum door sill panels, badging inside and out, an engine build plaque under the hood, Callaway key fobs and the vehicle documentation package.

While it is hard for most people to consider a $98k sports car affordable, when you consider the vehicles that the Callaway Corvette Z06 will beat – many of which cost way more than $100k – the Callaway Z06 really is a budget hypercar.