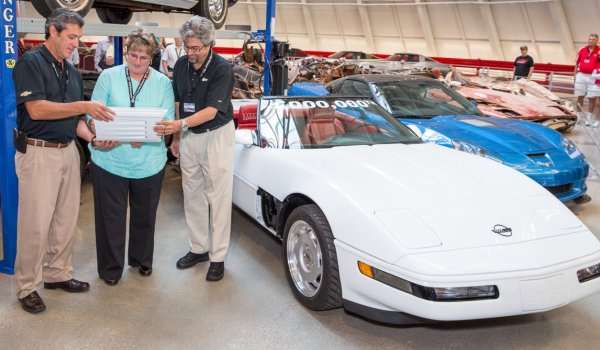 How GM Rebuilt the 1 Millionth Corvette

After a sinkhole under the National Corvette Museum in Bowling Green, Kentucky opened up and swallowed 8 classic Chevrolet Corvette display vehicles, General Motors vowed to fully restore the 1,000,000th Corvette ever built – a project which has been completed in a surprising way.
Advertisement

When the 1,000,000th Chevrolet Corvette fell through the floor of the National Corvette Museum in February 2014, the folks from General Motors quickly vowed to restore it back to its original condition, along with a few other cars. Really, the 1,000,000th Corvette seemed to be a fairly basic 1992 convertible, so when it was badly damaged when the sinkhole under the museum opened up, many speculated that it wouldn’t be all that hard to fix. After all, there are lots of C4 Corvette convertibles still on the road today, so parts can’t be that hard to come by. The restoration team could simply fix up the chassis, tear away the damaged parts and replace them with new parts.

Unfortunately, it wasn’t that easy, as the build team had taken measures to make the 1,000,000th Corvette special beyond what you can see simply by looking at it on the museum floor.

The Build Team Signatures
The 1,000,000th Chevrolet Corvette ever built rolled off of the assembly line back in 1992 in the form of a white convertible with red leather interior. To commemorate that incredible milestone, every member of the Bowling Green Assembly crew who built that white 1992 Corvette convertible signed the car as it moved along the assembly line. These signatures were added under the fiberglass body panels or on the rear of those fiberglass body panels, where they would be out of sight without some searching. As a result, this Corvette didn’t look different from a privately owned 1992 Corvette convertible in white.

However, with the signatures of the build team members on many of the components damaged by the sinkhole, the GM restoration team couldn’t just replace every damaged piece without erasing some of the history behind this 1992 Corvette. Because of that, the GM Design Mechanical Assembly group and the Fabrication Shops at GM Design spent 4 long months painstakingly rebuilding every part that they could, preserving the history of the signatures in those components along the way.
In the end, only a handful of major components on the 1992 Corvette were replaced and in doing so, the restoration team was able to transfer the signatures onto those new components.

On three of those four components, the team was able to scan and reproduce the signatures in the exact same place on the part. One of the lower trim pieces was so badly damaged that they could not scan the signature, but with the help of the National Corvette Museum, the restoration team was able to have build team member Angela Lamb sign the component in question (as shown above) – once again preserving the history of this car to the finest detail.

Second of Three Restored
The 1,000,000th Corvette was the second of three to be restored following the sinkhole event under the National Corvette Museum. The first was the 2009 Blue Devil Corvette ZR1 and the third will be the black 1962 Corvette. The 1,000,000th Corvette has already rejoined the sinkhole exhibit at the Museum, where it joins the Blue Devil Corvette and the five other historic Corvettes which are too badly damaged to repair.