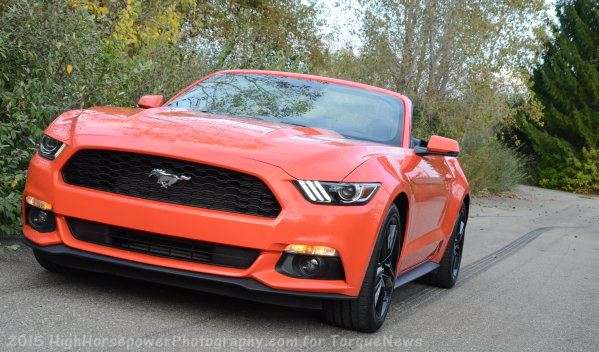 How the EcoBoost Mustang is Dominating in Southern California

Some critics insisted that the 2015 Ford Mustang with the new 2.3L EcoBoost 4-cylinder engine would flop, but with the new Mustang posting sales numbers that we haven’t seen from a muscle car in nearly a decade - the EcoBoost package has proven to be incredibly popular, particularly in Southern California
Advertisement

The Ford Mustang hasn’t been the bestselling muscle car in America since 2009, but the introduction of the 2015 Mustang late in 2014 has led to huge sales numbers. The Mustang has beaten the Chevrolet Camaro and Dodge Challenger soundly every month this year and in doing so, Ford has built a lead on the performance car sales sheet that is nothing short of insurmountable at this point.

So, the Ford Mustang is all but guaranteed to be the bestselling muscle car and the bestselling sport car in America for 2015 and that will come with a sales total that will be higher than any annual figure of the Chevrolet Camaro since it returned to the lineup in 2009. While the 2015 Mustang sales likely wont catch the 2007 total of 134k+, but this will be the first time since 2007 when Ford sold more than 100,000 Mustangs.

Mind you, this is the same car that, when introduced, critics were sure would fail, as the 2015 Mustang design was unfairly dumped upon simply for being different. Many of those same critics pointed at the 2.3L EcoBoost engine as another ingredient in the recipe for failure, but the Ford team has once again shown that they know better than the critics – as the 2015 Mustang EcoBoost package has been a big part of the sales success.

Among that SoCal market, Mustang EcoBoost models have accounted for a whopping 47% of sales this year. Ford hasn’t offered up the sales mix numbers, but in the event that the V6 accounts for just 1%, the best that the Mustang GT could be hitting is 52%. Of course, there is a chance that the V6 sales could be high enough that the EcoBoost is the most popular engine choice, but since Ford didn’t state that, Im not going to make any assumptions. The bottom line is that in the Mustang’s strongest market, the EcoBoost is just as popular as the 435hp V8.

Finally, among those folks in SoCal who purchased a 2015 Ford Mustang EcoBoost, 56% moved to the Mustang from another brand and they did so for a turbocharged 4-cylinder Mustang.

Other Big Sales News for the Mustang
While the boom in Southern California sales – particularly those with the 2.3L EcoBoost engine – is a big part of the 2015 Ford Mustang’s success, there is one other key area where the Mustang has improved in a big way. Millennials (buyers between the ages of 16 and 35) are not the key car-buying crowd, but they are important in the fact that as they get older, they become the most active car buying group.

Now that we are into the fourth quarter of 2015 with three months left in the year, it will be interesting to see how the Ford Mustang finishes off the sales year. We can expect numbers to dip as the temperatures drop in areas that see an actual winter, but the first examples of the new Shelby GT350 and GT350R could help keep sales up through the end of the year.

For a virtual ridealong in the 2015 Ford Mustang EcoBoost, check out the video below!