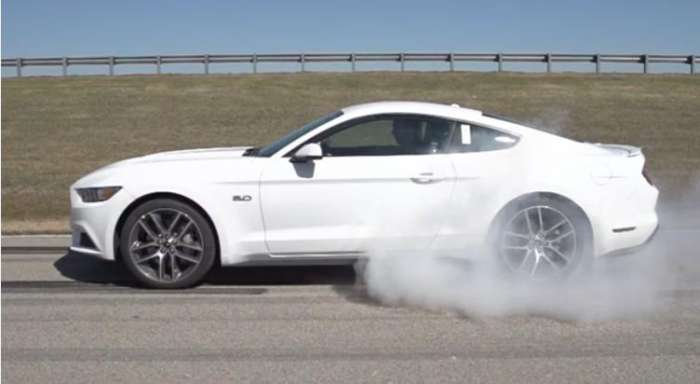 When Ford Motor Company announced the Line Lock feature for the 2015 Mustang GT, they talked about how it would help benefit racers only to finish by saying that racing will void your engine warranty – leaving many people to wonder when you should be using Line Lock as to not void your warranty.
Advertisement

First of all, a quick look at the verbiage at the end of the press release introducing the line lock feature on the 2015 Ford Mustang GT:
“Electronic line-lock for 2015 Mustang GT is intended for use only on racetracks. Racing your vehicle will void your warranty.”

In speaking with the Motor Authority, Ford Motor Company global Mustang communications coordinator Brian Cotter explained that there are perfectly acceptable ways to use the line lock to bring out the performance potential of the new Mustang GT – but there are some stipulations. First and foremost, actual racing on a drag strip against another car or against the clock is racing by definition and should Ford find out that you have done that with your 2015 Mustang GT, it will void your warranty. Whether or not you use the line lock makes no difference and this no racing rule is true of current Mustangs as well. Really, this applies to pretty much every vehicle sold in the US shy of the new Chevrolet Camaro Z/28. Along the same lines, if you are racing illegally against another car on the street in your 2015 Ford Mustang GT – again whether or not you are using line lock – you can potentially void your warranty.

Bracket racing against the clock or heads up racing against another car on the drag strip will void the warranty in your 2015 Ford Mustang GT – so how do you use it at the track? Well, if you are making time only runs, you are not racing. If you make a run down the quarter mile without any predetermined time goal (as when bracket racing) or without another car in the other lane, you are testing your Mustang’s performance capabilities – not racing. Based on that, it seems that you would have to be making single car runs whenever you go to the track, but so long as it is a timing event and not an actual competitive event between your Mustang GT and the car in the other lane, you shouldn’t have to worry about losing your warranty.

With all of that being said, it is very obvious that more than a few of the 2015 Ford Mustang GT owners who use the line lock system at the track will technically be racing. There are few cars that are more commonly seen at the drag strip and with the 2015 Mustang being the most track-friendly version thus far with the addition of both line lock and launch control, we can expect to see plenty of the new Mustangs at the track later this year and in 2015.

Now, how exactly will Ford Motor Company catch 2015 Ford Mustang GT owners racing? That is a grey area. Back in the 1960s and 1970s, dealerships would send reps to local drag strips to record license plate numbers and VIN numbers so if those vehicles showed up at the dealership with warranty issues, the dealership could refuse that free service. In this day and age, it would be almost impossible for dealerships to do this so mentioning this is really just more about legality issues than protecting warranties. In the long run, if you own a 2015 Ford Mustang GT and you spend any time racing, it is best to tell the dealership that you’ve only been making time runs when you need to get any warranty work done. I’ve done plenty of racing in my days and some of those runs were made in cars with factory warranties – all of which had the license plates removed and visible VIN plates covered. Always better to be safe than sorry.

Jeff wrote on November 7, 2015 - 11:46pm Permalink
Ford has since cleared it up, several times that using this feature on your own to improve your driving, however using the feature to race other cars is not the intent... Basic Cover Your Ass statement but up 2 them 2 prove if u raced with someone vs. bettering your driving skills!