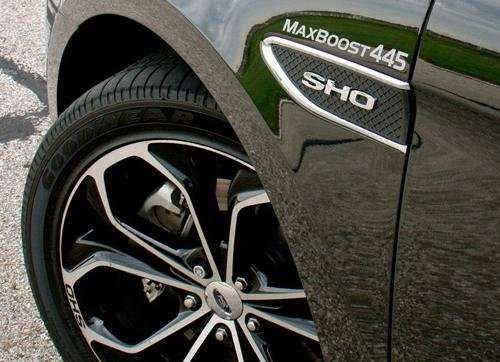 Hennessey Performance is best known for their high performance V8 and V10 American performance cars, the Texas based tuner has turned their attention to the powerful 2013 Ford Taurus SHO sedan with MaxBoost 445 package – offering impressive results of 445 horsepower and quarter mile times in the high 12 second range.
Advertisement

The Hennessey MaxBoost 445 package for the 2013 Ford Taurus SHO begins with a set of Hennessey polished hard pipes in place of the rubber turbo piping that helps to handle the added boost needed to make all of that power. A dual cold air induction system and a Corsa stainless steel cat back exhaust system work together to help the high performance EcoBoost V6 breath while a Hennessey Performance engine management calibration helps bring it all together for the total output of 445 horsepower.

With the help of the standard SHO all wheel drive system and a paddle shifted 6-speed automatic transmission, the MaxBoost 445 SHO can soar down the quarter mile in just 12.8 seconds with a trap speed of 109 miles per hour. Also, the Hennessey SHO MaxBoost 445 can dash from 0 to 60 miles per hour in just 4.3 seconds – an improvement of almost a full second over stock. This is a pretty significant improvement over the best time of the Lincoln MKS MaxBoost 435 of 13.08 at 105.5 miles per hour which would hit 60 in 4.5 seconds.

Thanks to the video below, we can also see (hear) that the MaxBoost package sounds fantastic at wide open throttle.

In addition to the go-fast goodies, the Hennessey MaxBoost 445 package for the Ford Taurus SHO adds unique Max Boost 445 badges on the fenders (as shown above on the right) and the curvy Hennessey logo on the trunk face. Inside, the Hennessey SHO receives a serialized dash plaque (with a similar plaque on the engine) and a set of Hennessey embroidered headrests. Finally, the whole package is covered by a 1 year, 12,000 mile warranty.

Hennessey has not announced the pricing for the Ford Taurus SHO MaxBoost 445 package nor have they offered a video of the 445 horsepower SHO in action but there is a video of the MaxBoost 435-equipped Lincoln MKS below. Luckily, we know that the similar package for the 2010 Lincoln MKS carried an installed price of $4,495 so the MaxBoost 445 package for the 2013 Taurus SHO should be in the same pricing area.