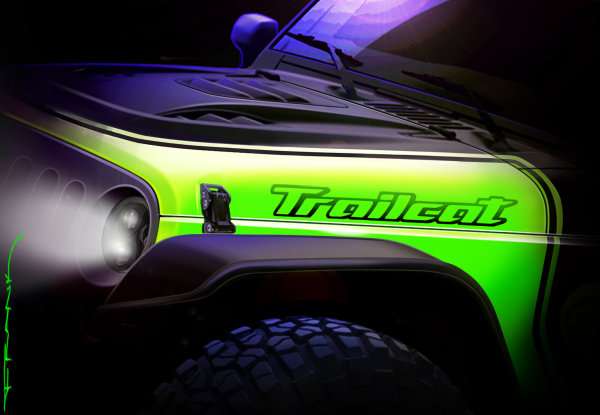 A Jeep Wrangler powered by the 707 horsepower supercharged Hellcat Hemi may be among the unique offroading concepts introduced at the Easter Jeep Safari later this month – along with 6 other eye-catching custom rides from the Jeep and Ram brands.
Advertisement

Each year, the Chrysler Group hosts the Easter Jeep Safari in Moab, Utah and each year, that popular offroading event is highlighted by a collection of Moparized Jeep and Ram vehicles. This year, it looks like one of the seven customized Chrysler Group concepts will be a Jeep Wrangler powered by the Hellcat Hemi.

Unfortunately, there are no details at all on the Trailhawk teaser image, but we can guess what this Wrangler might have in store for us based on what so many enthusiasts want to see.

Jeep Wrangler Trailcat Concept
In the modern automotive world, few terms get more online search engine attention than the Hellcat name and the Chrysler Group has done a masterful job of making the most of that attention. The Hellcat Charger and Challenger have been a hot topic for more than a year now and the rumor of a Hellcat powered SRT Jeep Grand Cherokee has become one of the most popular discussion topics on the various social networks.

This time, it looks like Chrysler is going to use the Hellcat Hemi to turn some heads at the Easter Jeep Safari, provided that the Trailcat Concept is the supercharged Wrangler that we all expect.

Mopar has built other SRT-powered Wranglers in the past, so it seems very likely that they would take the most powerful production V8 of all time and make the most powerful Wrangler concept of all time. The Trailcat also appears to have huge tires paired with a high riding suspension setup, along with some unique physical upgrades like the bigger wheel flares and the black-and-green paint scheme. I also wouldn’t be surprised if they put a roll cage in it, considering that it will likely have more than 707 horsepower.

Provided that the Trailcat is indeed a Hellcat-powered Jeep Wrangler, it shouldn’t get everyone too fired up about a production version. Mopar has offered up more than one Hemi-powered Wrangler Concept in the past and while all of them were very cool – it just isn’t a production-friendly configuration.

The Hellcat Wrangler will, however, make for one incredible offroading concept. Just imagine how much fun it would be hitting a big mud pit, gunning the throttle and letting the Hellcat Hemi’s 707hp and 650lb-ft of torque sling mud high into the air.

The Easter Jeep Safari takes place in Moab, Utah on March 19th to the-27th. The Jeep Wrangler Trailcat Concept will be joined by 6 other Moparized concepts from the Jeep brand, and maybe the Ram brand.

Avi wrote on March 3, 2016 - 6:22pm Permalink
I can understand the engine being put into the grand cherokee.....but a wrangler?! The jeep will easily flip on its side.
Shane wrote on March 5, 2016 - 3:38pm Permalink
I think it is such a good idea the wrangler has Ben underpowered for a long time. Ever since they got rid of the in line 6. I for sure would love a hellcat jeep sign me up,!!!!! Next one they should try is a massive twin turbo diesel wrangler!!!!!