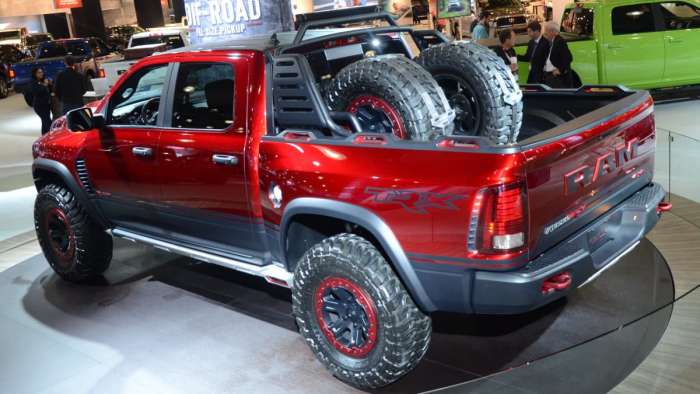 The Ram 1500 TRX Rebel Concept had 575 horsepower while every other Hellcat Hemi-powered vehicle from Dodge and Jeep have had at least 707 horsepower – leading us to believe that the supercharged production truck will join the crowd.
Advertisement

When FCA introduced the 2016 Ram 1500 TRX Rebel Concept, it was limited to “only” 575 horsepower. Since FCA recently teased a modern Ram 1500 with styling cues of the TRX Rebel Concept, the Hellcat-powered pickup has become the hot topic in the American high performance world. Since the only official hint at the pending production is the Drive for Design Contest poster, we don’t have any details, leading to many discussions on social media about the supercharged super-truck.

The most popular topic is the horsepower rating, with some people wondering why the concept only had 575 horsepower while others expect that it will have 707 horsepower – if not more. Some even believe that the high performance pickup will be launched with the 797-horsepower Redeye engine, but we think that is unrealistic at this point in time.

Hellcat Ram Horsepower Speculation
When the 2016 Ram 1500 TRX Rebel Concept was introduced, it packed the same 6.2-liter Hellcat Hemi as the Dodge Charger and Challenger, but where the cars offered 707 horsepower, the concept pickup only had 575 horsepower. We were told that the lower power levels were due in part to the intake and exhaust systems that were put together for the concept, but I also think that the lower power level was used to protect the four-wheel-drive parts.

Keep in mind that when the Ram 1500 TRX Rebel Concept was introduced, the Jeep Trackhawk had not yet been introduced, so the heavy duty drivetrain parts in the supercharged Grand Cherokee hadn’t been revealed yet. In an effort to conceal the details of the upcoming Trackhawk prior to its debut, lesser drivetrain components were used and to protect them, the Hellcat Hemi packed considerably less power.

However, now that the Jeep Grand Cherokee Trackhawk with 707 horsepower has been on the street for a few years, it is clear that FCA has a four-wheel-drive setup that will handle the big power in the Quadra-Trac Active On Demand 4WD system. With that in mind, I expect that the Hellcat-powered Ram 1500 will have the same 707-horsepower rating as the Dodge and Jeep models when they were first introduced. The two vehicles may not share the same components, but it is clear that FCA has access to four-wheel-drive parts to handle 707 horsepower.

Marketing Matters
Thanks to the Jeep Trackhawk, we know that FCA has drivetrain parts that will handle all 707 horsepower from the Hellcat Hemi, but there is another reason why I don’t expect to see a rating of 575 horsepower from a supercharged Ram engine. 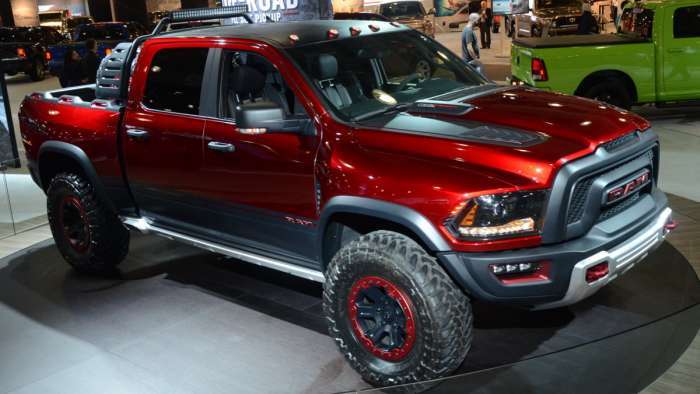 Although 575 horsepower would make it the most powerful production road truck ever, enthusiasm over this pickup would be doused by the conversations of “why not 707 horsepower?” Then FCA and Ram people would have to come up with a good enough reason for the truck to offer 132 less horsepower to satisfy the performance vehicle world that had been expecting 700+ horsepower. Rather than focusing on the fact that it has 575 horsepower, more than any other production truck, many people would focus on why it doesn’t have 707 horsepower.

Ultimately, offering a Ram 1500 with a 707-horsepower Hemi just plain sounds better while fitting better with the other Hellcat-powered vehicles from a marketing perspective. When combined with the fact that components similar to those in the Trackhawk can handle all 707 horsepower, my safe money says that the Hellcat Ram 1500 will feature the same output as the rest of the Hellcat lineup.

Jim j eberly wrote on March 7, 2020 - 1:59pm Permalink
Put me on the list for new 2020 ram 1500.hellcat truck,I live I oregon closer dealer is lithia dodge roseburg otegon
James Howard wrote on March 12, 2020 - 7:18am Permalink
I want one! It would make moving materials much better. Seeing I run a carpentry business.