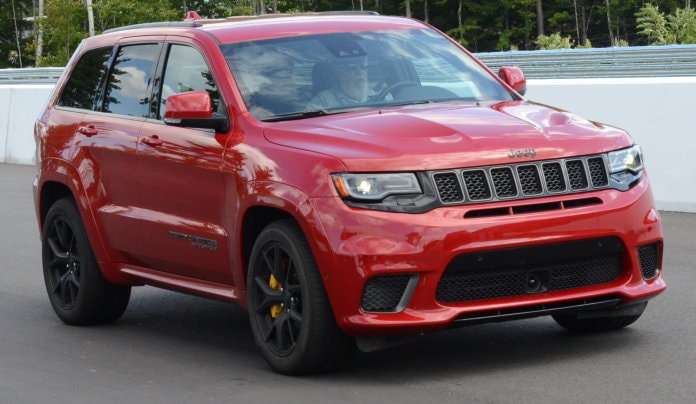 The Jeep Grand Cherokee Trackhawk is the first Hellcat Hemi-powered vehicle officially sold by FCA in Australia and, not surprisingly, the 707 horsepower SUV is already selling very well Down Under – with the limited Launch Edition models selling out in less than a month.
Advertisement

Next to the United States and maybe Canada, there is no automotive market in the world that loves American performance vehicle as much as Australia. Although they have some of their own performance models that we don’t get in the US, Aussie lovers of American muscle cars have long been unable to buy the top performance cars from Chrysler, Ford and General Motors.

The newest generation of the Ford Mustang is the first built with the right-drive configuration that is required for use in Australia, but the Chevrolet Camaro, the Chevrolet Corvette, the Dodge Challenger and the Dodge Charger are still only available through expensive grey market channels. This means that Aussie Mopar fans have been unable to buy a Hellcat-powered vehicle from their local dealership, but that all changes with the introduction of the 2018 Jeep Grand Cherokee Trackhawk.

The prime challenge in offering either of the Dodge Hellcat cars in Australia is that those models aren’t offered with right-hand drive. Fortunately, the Grand Cherokee is offered in Australia with right-drive, so it was easy for FCA to offer the Trackhawk Down Under. Not surprisingly, the first Hellcat-powered vehicle offered in Australia is already a huge success, with local buyers ordering hundreds of supercharged SUVs before the first unit has touched their shores.

Special Edition Trackhawk Sells Out in a Hurry
In addition to announcing that the 2018 Jeep Grand Cherokee Trackhawk would be sold in Aussie Jeep dealerships, FCA announced the limited run of Launch Edition models. To celebrate the 6.2L supercharged Hemi, the Trackhawk Launch Edition is limited to 62 units. Even with a price starting north of $135,000 AUS, those 62 special edition models sold out in less than three weeks and according to the Aussie website CarAdvice, more than 200 examples of the Trackhawk have already been ordered Down Under.

While 200 examples of the 2018 Jeep Grand Cherokee Trackhawk doesn’t seem like a big number compared to the US market, where we are likely to see several thousand sold, the Australian market could be the second-strongest for the supercharged Jeep. Australian auto companies don’t need to worry about things like fleet fuel economy numbers, so Jeep dealers Down Under could literally sell as many Trackhawks as they can get shipped from Detroit.

With the Trackhawk being an Aussie Mopar lover’s first chance to buy a Hellcat-powered vehicle without the headache of a pricy grey market importer, it is likely to continue selling well within the Mopar community, but with the Trackhawk being the most powerful SUV in the world – the appeal extends well beyond Mopar diehards.

Gareth Hall wrote on January 20, 2018 - 7:43am Permalink
It would be awesome if Jeep could keep the purchasers of the launch edition informed. My delivery was scheduled for 30/12/17.