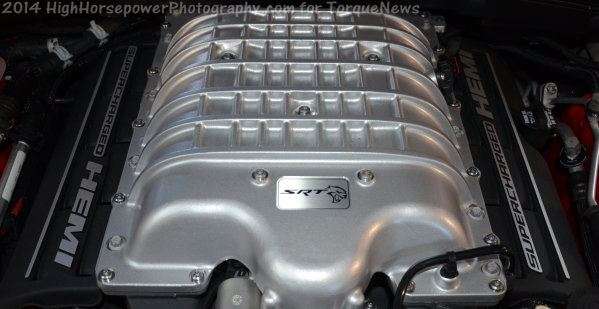 While the new Hellcat Hemi makes the 2015 Dodge Charger the world’s most powerful sedan and the 2015 Dodge Challenger the world’s 6th most powerful sports car, the Hellcat project was suspended for some time with the possibility never starting back up – but persistent members of the SRT team made sure that this supercharged beast did become a production reality.
Advertisement

I recently attended a deep dive media event for the 707 horsepower Dodge Challenger and Dodge Charger SRT Hellcat models. At that event, we learned everything that you could want to know about the most powerful American production road motor of all time, including one bit of information that will make most Mopar lover’s hearts skip a beat.

The Early Days of the Hellcat Hemi
The idea of supercharged super-Hemi codenamed the Hellcat was first introduced within the doors of the Chrysler Group headquarters back in early 2011. The crew pushing for the Hellcat Hemi wanted the Chrysler Group to roll out a new supercharged V8 that would serve as the ultimate American performance engine. In 2011, the prices of gasoline had calmed a bit and early in the year, the average price was “only” in the low to mid 3 dollar range, so it seemed like a good time to offer up a super powerful engine. However, this was the same time that the Fiat management was working on a direction for the company – and that direction didn’t include an ultra-high performance V8.

Fortunately, the creators of the Hellcat Hemi engine project kept pushing and four months after the Hellcat project had been pushed to the back burner, the engineers were given the green light to begin working on the new supercharged Hemi V8. Starting in the fall of 2011, the SRT engineers worked on every aspect of the 6.2L Hellcat Hemi and roughly two and a half years later, Chrysler announced the existence of the Hellcat Hemi to the automotive world in the revised 2015 Challenger.

A short while later, the SRT team announced at the Woodward Dream Cruise that there would also be a Hellcat Charger and with 707hp, it would be the world’s most powerful sedan. The Hellcat Charger offers all of the performance advantages of the Challenger (except for the manual transmission) so with 707hp, the Hellcat Charger is the most powerful sedan ever. A top speed of 204 miles per hour makes it the fastest sedan in the world and a factory-stock quarter mile time of 11 seconds flat makes it the quickest sedan in the world.

The new 6.2L supercharged Hellcat Hemi is the most powerful production road motor in the history of the American auto industry, putting the 2015 Charger and 2015 Challenger among some of the biggest supercar names in the world…and it almost never happened.