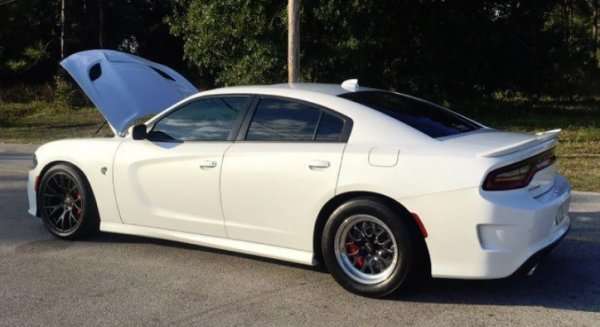 While I hadn’t realized it, all of the Dodge Challenger and Charger Hellcat cars we have featured running in the 9-second range have been running high octane race gas, but earlier this week, Robert Lamb ran a 9.993 with his Hellcat Charger running on 93 octane gasoline – making his supercharged Mopar the first to run in the 9s on pump gas.
Advertisement

We feature a great many Hellcat Challengers and Chargers here on TorqueNews and in many cases, those supercharged Dodge muscle cars are running in the 9-second quarter mile range. The cars running 9s are all modified in different ways, but before this week, every 9-second Hellcat Challenger or Charger was tuned to run on high octane race gas. The type of fuel varies from car to car, but all of the 9-second Dodge Hellcat cars in the past have been running fuel that you cant get at just any gas station.

That all changed on Wednesday, when Robert Lamb drove his Hellcat Charger into the 9s while running on 93 octane pump gas.

Robert Lamb’s 9-Second Charger
Robert Lamb’s Dodge Charger SRT Hellcat is running on 93 octane pump gas, but it took a host of upgrades to get this big sedan into the 9-second range and Mario Abascal at Gearhead Fabrications was tasked with the build.

The output of the Hellcat Hemi has been increased with a 2.75 upper pulley, an ATI lower pulley, ID1000 injectors, a KB Boost-A-Pump, catless midpipes and a Legmaker carbon fiber cold air intake setup – all of which is brought together with a tune by Brian McMahan from Drag-on Resources. A Drive Shaft Shop carbon fiber driveshaft sends the power through the 3.09 gears to 17x10 Weld Racing wheels wrapped in 305/45 Mickey Thompson Street R drag radial tires. Really, those are fairly common modifications among those Hellcat cars that are raced regularly, but the tune, the driver’s ability to launch the car and some good air all played a role in the 4,600lb Charger running 9s on pump gas.

On the record run, Lamb launched his Hellcat Charger hard enough to pull a 1.486 60 foot time, which was reported instantly via the on-board timing system. When he saw the 1.48 on the dash, he knew that he had a shot at breaking into the 9s and when he blasted through the lasers on the top end – his monster Mopar muscle car had done it.

Robert Lamb’s Hellcat Charger laid down a 9.993 quarter mile ET with a trap speed of 137.89 miles per hour. I find it to be particularly fitting that the first ever Hellcat to run in the 9s on 93 octane pump gas ran an ET ending in “93”.

Unfortunately, Lamb didn’t have someone there to film the record run, but I have seen the timeslip and I’ve spoken with several people who were at the track to witness the run in person.

This is Robert Lamb’s Slow Car
For those of you who aren’t familiar with Robert Lamb, it should be noted that his 9-second Dodge Charger SRT Hellcat is actually his “slower” daily driver. Lamb is also the owner and driver of the first ever Dodge Magnum to run in the 8s, which ran a stunning 8.995 back in January at full street weight. The video below shows that record run in the Magnum, but it should be noted that since being the first in the 8s with a Magnum - Lamb's station wagon has run a best time of 8.62 at 160 miles per hour.

Based on the fact that Lamb has a street-driven 8-second Dodge Magnum, it should be clear that there is a heavy dose of “driver mod” involved in his Hellcat Charger running 9s on 93 octane pump gas, but this is proof that it can be done.