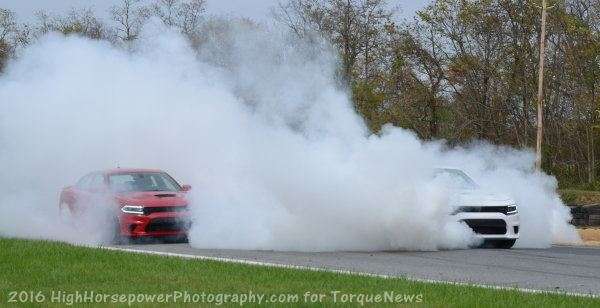 fter speaking with a few dealership representatives around the country, it appears as though the Dodge Challenger and Charger with the Hellcat engine is readily available in many parts of the United States – and in many cases, there is no markup.
Advertisement

A year ago at this time, the demand for the Dodge Challenger SRT Hellcat and Dodge Charger SRT Hellcat was so high that the company had stopped taking orders a month earlier and finding one on a lot around the country meant that you were going to pay a pretty hefty markup. Really, throughout the entire 2015 calendar year, it was nearly impossible to find a Charger or Challenger with the Hellcat Hemi without a markup, unless you had ordered one from a dealership well in advance. Those folks who preordered their cars when the opportunity first arose may have gotten to pay MSRP, but there is a good chance that if you are holding out for MSRP – you are still waiting for your 707hp Mopar muscle car.

Well, based on conversations I have had with dealership representatives around the country, the wait for MSRP should just about be over, as there are both Challengers and Chargers in the dealership inventory all over the country. Many of them are being advertised at MSRP and in one case, I have seen limited-time advertisements on social media for Hellcat cars under MSRP.

That is obviously a very unique case and it was a limited time offer in a private Facebook group, but the fact that one dealership is willing to go under MSRP is a clear sign that the demand has finally eased up enough to kill the markups.

Hellcat Challenger and Charger Inventory
In checking my local Dodge dealership, I see that they have one 2016 Dodge Challenger SRT Hellcat in their inventory with a “guaranteed price” of $72,770 – which could be MSRP depending on the features. After seeing this, I reached out to one of my dealership contacts in a different part of the country and asked him about their availability. They have one Challenger and one Charger with the Hellcat engine in their inventory with more on the way, but more importantly, he offered me up some information from the dealer locator system. Within 150 miles of his dealership, there were more than 50 Hellcat Chargers and more than 100 Hellcat Challengers, and while he wasn’t able to give me an idea of pricing for all of those vehicles, he did explain that when the cars were nearly impossible to get, the locator would show none as being available in that same geographic range.

In other words, there are plenty of Hellcat Challengers and Chargers on lots around the country, so if your local Dodge dealer doesn’t have one available, they should most certainly be able to find one for you within a reasonable distance. Really, the smarter move is to hunt around and find a dealership within your range and visit that dealership for specific pricing.

While this particular dealer contact prefers to remain anonymous, I have spoken with a variety of dealership reps over the past few years in relation to Hellcat availability, but all of them were in the Midwest or along the east coast. However, I recently spoke with Ryan Melloy from Melloy Dodge in Albuquerque, New Mexico. He explained that they had several Hellcat cars available for MSRP, so while some readers along the west coast are reporting very limited availability of the Hellcat Challenger and Charger – and markups on available cars – it looks as though paying MSRP for a 707 Mopar muscle car is as close as New Mexico.

At this point, someone who is very serious about buying a new Hellcat Challenger or Charger at MSRP can find one, but it might take some hunting. Within a few months (if that), everyone in the country should be within a reasonable drive from a dealership with at least one of the Hellcat cars in stock and for sale at MSRP.

LG's New EV Battery Plant Is a Welcome News for Tesla
Tesla Giga Berlin's New Hurdle: It's Not Only the Gov't, but Now Tesla Itself
END_OF_DOCUMENT_TOKEN_TO_BE_REPLACED