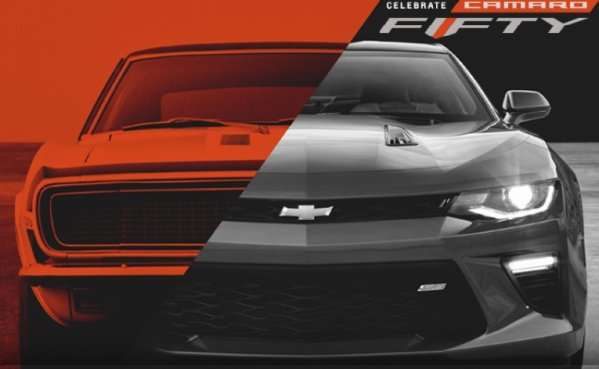 On September 29th, 1966, General Motors took the first orders for the 1967 Chevrolet Camaro so today is effectively the 50th birthday of the storied American performance car and GM has rolled out a revamped version of their celebration website to offer even more Camaro information to fans - including a chance to share your own Camaro pictures!
Advertisement

The Chevrolet Camaro is, without question, one of the most well-known vehicles in the history of the American auto industry, with a reputation that has spread around the world. We might be able to say that the Camaro is one of the most well-known cars in the world, but I imagine that there are some markets which are devoid of American muscle cars.

In any case, since the Chevrolet Camaro went on sale on this day 50 years ago, it has been one of the most popular cars in the American market. The Camaro has seen 6 generations over the past 50 years and during the last half century, the Camaro has routinely been among the most powerful cars sold in America.

It should be noted that the Camaro left the Chevrolet lineup for the 2003-2009 model years in what can only be called a mind-blowingly foolish move by GM. However, the Chevrolet muscle car returned for the 2010 model year with so much success that it led the US market in sporty car sales for the first five years after rejoining the brand.

To celebrate 2016 marking the 50th year since the Chevrolet Camaro was introduced, GM hosted a series of events leading up to the 2016 Woodward Dream Cruise. They announced the celebration information on a special page on Chevrolet.com, but now that the official 50th anniversary of the Camaro going on sale has arrived, GM has rolled out a few new features on CamaroFifty.com, including an area where Camaro fans can show off their own Camaro-related images.

CamaroFitfy.com
Over the past six months or so, General Motors has been talking about the 50th anniversary of the Chevrolet Camaro on a special page on Chevrolet.com, but you can also access that page at CamaroFifty.com. Early on, this page offered information on the celebration around the Woodward Dream Cruise along with a series of historic Camaro videos which were unlocked every few weeks.

Now that Woodward is in the past, the discussion about the Camaro 50th anniversary celebration has been removed, but there is a new interactive timeline featuring the artwork shown on Facebook over the past few weeks. Each generation of the Camaro has its own gorgeous artwork and within each piece of generation-specific artwork there are points that you can click on to open windows containing information on the Camaro from those model years. There is also a video showing how these generational Camaro paintings were made on an old garage wall.

Below the artwork section is the collection of Camaro videos which unlocked every few weeks over the past few months, including the final video which unlocked last week.

Finally, the other new area is located at the very bottom of the page and in this area, you can see images added by Camaro fans around the world. By using the hashtag #CamaroFifty, anyone can add their images into the system for display on the official Chevrolet website.