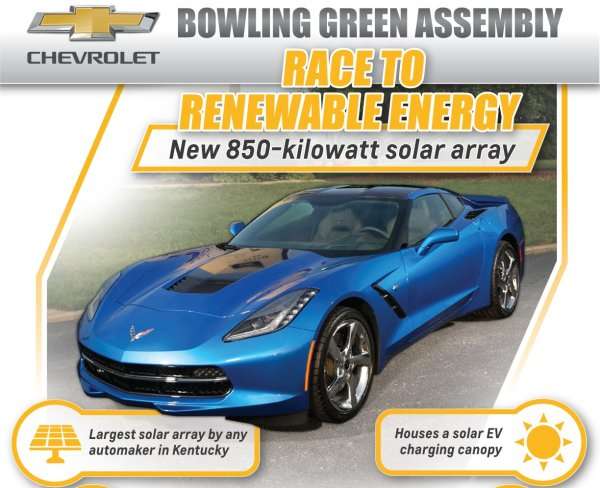 GM Will Build 850 Corvettes Each Year with Solar Power

General Motors will break ground later this month on a new solar panel system at the Chevrolet Corvette plant in Bowling Green, Kentucky, and when the 850-kilowatt array is completed, the facility will generate enough power each year to build 850 Corvettes.
Advertisement

According to the Solar Energy Industries Association, General Motors leads the auto industry in solar energy usage in the United States and the newest expansion to their use of solar energy begins later this week at the Chevrolet Corvette plant in Kentucky. The Bowling Green Assembly Plant solar array will be the biggest of its type in Kentucky and once fully functional, these solar panels will generate around 1.2 million kilowatt hours each year. Based on average usage numbers, these solar panels will harvest enough free energy from the sun to produce about 850 new Corvettes at the Bowling Green facility.

At the average rate over the past year or so, these solar panels will allow GM to make about 10 days’ worth of Corvette production with clean, completely renewable energy.

“Corvette customers are passionate about their vehicles because of their design, technology and precision performance,” said Rob Threlkeld, GM global manager of renewable energy. “Offering them a product that is partially built using green energy will be another proof point that they’re driving a true supercar.”

The Chevrolet Corvette is already the most fuel efficient sports car sold in America with an EPA estimated figure of 29mpg on the highway, so for a car with 460 stock horsepower, it has a surprisingly small carbon footprint. The addition of the solar panels at the Bowling Green Assembly Plant will help make the Corvette more ecofriendly on the production front – further reducing the carbon footprint of the bestselling premium sports car in the USA.

More Solar Energy Coming Soon
Over the next few months, General Motors will add over 2 megawatts of solar power capabilities at production facilities around the USA. In addition to the Bowling Green array, GM will add solar panel systems at the Rochester Operations facility in New York and at the Warren Transmission facility in Michigan. Once this next phase of additions is completed, GM will have solar arrays at 16 production facilities around the country capable of creating 15 million kilowatts of electricity each year. This much electricity would require a coal-based utility to burn some 11 million pounds of coal.

The steady addition of solar panel arrays at production facilities around the country and around the world by General Motors allows them to decrease their impact on the environment through energy usage while also keeping costs down. Lower costs leads to the ability to keep new vehicle prices down while the use of solar energy leads to a cleaner environment for us all.