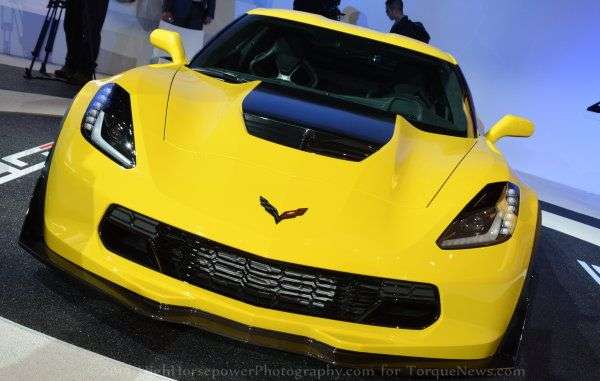 GM recently trademarked the word Zora - the first name of the man responsible for the early performance of the Chevrolet Corvette – and I’m lead to wonder if the company might be looking to pay homage to the late engineer with a new special edition package for the C7 Stingray.
Advertisement

Automakers are constantly applying for trademarks on names that may or may not be used on a future model so this is just a speculative piece on whether the C7 Chevrolet Corvette Stingray might be getting some sort of special edition package to pay tribute to the man who helped put the Corvette on the map in the racing world. Some of the names that are trademarked are used while others are not as some automakers trademark some names simply to make sure that the name doesn’t get snatched up by the competition. For example, even when the Chevrolet Camaro was out of production from 2003 through 2009, GM would have maintained the trademark on the Camaro name so that it wouldn’t fall into the hands of some Chinese company looking to build a knockoff.

Who was Zora?
When the Chevrolet Corvette was introduced for the 1953 model year it was a beautiful sports car, but with only 150 horsepower from the 3.9L inline six cylinder engine, the performance was a bit short. General Motors hired an engineer specifically to handle the task of getting more power under the hood of the Corvette so that it could better compete with other sports cars from around the world and that engineer’s name was Zora Arkus-Duntov. Arkus-Duntov joined General Motors in 1953 and within two years, he had literally invented the very first small block Chevy V8. Arkus-Duntov put his new 4.3L v8 into the 1955 Corvette with 195 horsepower, but that output grew to 240 horsepower for the 1956 model year.

Zora used one of those more powerful 1956 Corvettes to set the production car record at Pikes Peak followed by a trip to Daytona Beach where he hit 150 miles per hour in the flying mile. In the next few years, he would be named the director of high-performance vehicle design and development for Chevrolet in 1956, he introduced fuel injection to the Corvette (1957) and the implemented the first production use of a high lift camshaft. His efforts between 1953 and 1958 worked to put the Corvette comfortably on the world’s performance car map, but he had only just begun.

In 1962, Zora Arkus-Duntov was developing a special lightweight version of the 1963 Corvette that would be built in very limited numbers specifically for the purpose of road racing. While he had hoped to build 125 Grand Sport Corvettes, GM executives killed the program after only 5 were built. Those cars were beasts and they saw success with some of the most famous drivers in road racing history behind the wheel and today – all five of those cars are still accounted for in private collections. The Grand Sport name eventually resurfaced as a trimline package for a variety of Corvettes over the year, with unique features that focus on handling performance.

While Zora Arkus-Duntov didn’t help design the very first Corvette, he was solely responsible for making it the performance car that it became during the first generation while also having a massive impact on the history of the Corvette – much of which is due to his small block V8 engine.

Why Would GM Trademark His Name?
The most unimaginative possibility as to why GM would trademark Zora is to simply protect other automakers from using the name. It seems unlikely that Ford, Chrysler or any overseas competitor would use the name since Zora Arkus-Duntov is the only famous Zora in the automotive world is GM’s Zora and he only worked with GM. He was also a major part of the Corvette enthusiast community until his passing in 1996, years after leaving his role at GM in 1975 so even on his own time – he loved Chevrolet performance and the Corvette.

The next possibility for GM trademarking the Zora name is to put it on a special edition version of the Chevrolet Corvette. This could either be something similar to the C6 Grand Sport package with a collection of handling goodies applied to a base Corvette, or it could be something for more extreme. After all, Zora Arkus-Duntov had the biggest impact on the C2 Corvette, which was the first to wear the Stingray name. With the Stingray name returning for the 7th generation Corvette, it seems like a good time to pay tribute to the man who helped make the C2 the monster that is was.

The Chevrolet Corvette Zora Could be the Ultimate Track Car
My guess is that GM will offer up a limited number of C7 Chevrolet Corvette Stingray coupes and convertibles that will be built in the spirit of Arkus-Duntov’s original Grand Sport Corvettes. These cars would be absolute track monsters and like the lightweight 1962 Grand Sports, these would not be road cars. There have long been rumors that GM would produce the Z06X that debuted a few years back at SEMA. The Z06X was a race-only version of the C6 Z06 and with the C7 Z06 being billed as the most track capable Corvette or all time – GM might just have a track version up their sleeve. This car would offer better performance than the standard Z06, but it wouldn’t be as extreme as the Corvette C7R as it would be more production based.

Zora Arkus-Duntov wanted to build a C2 Corvette Stingray that was a monster road race car based on a production Stingray. The awesome new Z06 could be converted into that track monster and, in my opinion, the Zora name would be far more fitting than Z06X. 42 years after Arkus-Duntov dreamed of the original Grand Sport monster, his vision could see production and it might just wear his name.

Manoli Katakis wrote on June 15, 2014 - 4:11pm Permalink
It's beyond poor taste to not give credit to who broke the story first, which was GM Authority. And it was written by me. You're also incorrect in stating that automakers trademark names for the sake of protecting them from "Chinese knock-offs." Automakers have to use the trademark name they're applying for its intended purpose, or they don't get it.
Patrick Rall wrote on June 16, 2014 - 8:14am Permalink
What is beyond poor taste is for a journalist to go from site to site, claiming that people arent giving proper credit to someone for posting information from public records just to bring attention to his or her own site. Had I gotten the information from your article, I would have listed it as the source. I didnt get my information from your article and when I searched now to read your piece, the only articles that show up are others that listed your piece as the source. Im surprised that they found it in the first place considering that your article doesnt show up anywhere in the search engines.
Keith Griffin wrote on June 16, 2014 - 9:01am Permalink
You're wrong about trademarks. Companies need to keep them active in some form, which GM did with Camaro across various merchandising, otherwise they lose them. Not applying for the trademark or letting it lapse would let it fall into the wrong hands.