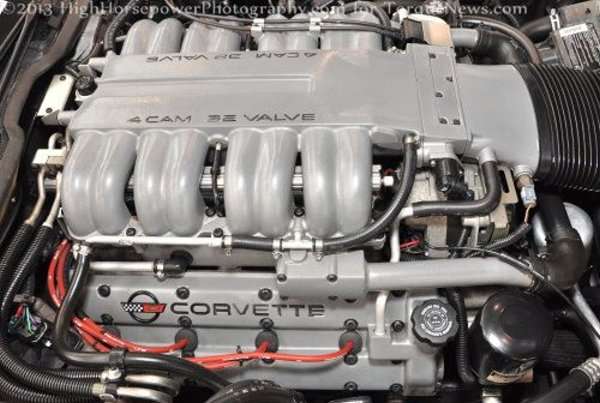 GM Trademarks LT5 Again, Presumably for the Next Chevrolet Corvette

General Motors has refiled the trademark application for the LT5 engine nomenclature, presumably for the upcoming Chevrolet Corvette ZR1 or perhaps the long-rumors mid-engine C8 Corvette – both of which would likely pack more power than the 650 horsepower LT4 in the Corvette Z06 and the Camaro ZL1.
Advertisement

I missed the mark a bit back in 2013, as the first high performance C7 Corvette was the Z06 rather than a ZR1 and the engine in the new Z06 is the LT4, not the LT5. The new Corvette Z06 has really proved to be the successor of the C6 Corvette ZR1, but even with the 650 horsepower supercharged C7 Z06, there have been persistent rumors of a spicier Corvette wearing the ZR1 name. At the same time, some people believe that the ZR1 name will be reserved for the upcoming mid-engine C8 Corvette while the future Z06 will get a more powerful engine, but in either case, it appears as though the future premium performance Corvette will have an LT5 engine.

What Might the LT5 Be?
According to GM Authority, General Motors has now moved to protect the LT5 name and while it could be purely preventative (keeping another company from using that designation), the odds are far better that this will be the next iteration of the LT V8 engine family. The LT1 was introduced in the Corvette Stingray and then the Camaro SS. The LT4 was introduced in the Corvette Z06 and then Camaro ZL1. If history has taught us anything, the LT5 will likely be introduced as a Corvette engine at first and there are two forms in which it could be introduced – a C7 with more power than the current Z06 or the mid-engine C8.

While the LT4 makes the current Corvette Z06 the most powerful production Chevrolet product of all time, there have been some complaints about the cooling troubles of the LT4 and the lack of power relative to other American performance engines (read: Hellcat). There have been rumors that GM is working on a more powerful and more track-capable version of the Z06, and the introduction of a C7 Corvette ZR1 could be that supercar. Again, the introduction of the LT5 in a Corvette ZR1 would make sense, since the last application of a GM LT5 engine was in the C4 Corvette ZR1 (shown above).

If GM does go this route, expect that the LT5 will be a supercharged engine with better cooling and more power than the LT4. You have to think that GM would love to knock Dodge off of their high horse, so something with more than the Hellcat Hemi’s 707 horsepower would allow GM to claim the most powerful American production car.

This is all speculation for now, but with the auto show season approaching, I wouldn’t be surprised to see a new Corvette with monster power on the stage in the next six months.