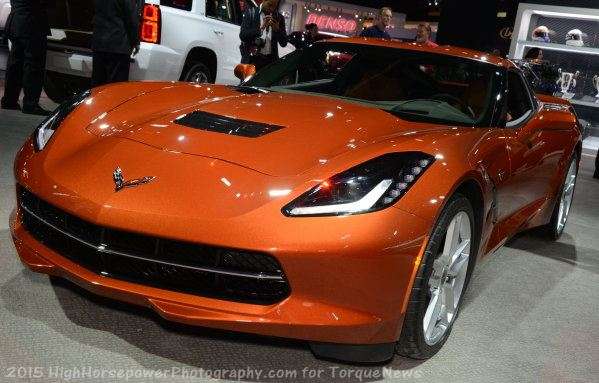 GM Recalls a Handful of 2015 Corvette Models for Loose Nuts

General Motors has issued a recall for a very small group of Chevrolet Corvettes over a concern that the a rear suspension component may not have been properly tightened during assembly - which could cause a major drivability issue if it comes completely unfastened.
Advertisement

General Motors was plagued with recalls in 2014, but this new Corvette recall is the first official recall order for 2015. Fortunately, it affects a very, very small group of cars and it should be very easy to fix at the dealership, so very little time will be spent waiting for the repair to be completed.

The Problem
General Motors has discovered that a handful of 2015 Corvette sports cars have a rear suspension component that may not have been properly tightened during assembly. Specifically, the outer ball joint on the rear toe link may not have been tightened properly. In an independent rear suspension setup like the one in the C7 Corvette, the toe link controls the angle of the wheel so if the toe link was to come completely unbolted, the direction of the rear tire could change suddenly.

Having one of your rear tires suddenly decide to turn in some random direction would obviously increase the likelihood of a crash, so GM is recalling the Corvette coupes and convertibles with the troublesome nut to make sure that everything is tightened to the proper specifications.

Even if the rear toe link ball joint doesn’t come all of the way unfastened, having it work itself loose will cause a metallic banging sound when the rear wheels go over slight bumps in the road, so Corvette owners who are experiencing that issue may want to call their dealership right away. Of course, if you know your way around the underside of your Corvette, you could crawl under and check to see if all of the nuts and bolts on the toe link seem to be tight enough – but it is still best to let the dealership check to make sure that everything is set to the proper torque specs.

Few Cars Affected
If there is any good news for this new Chevrolet Corvette recall, it is that very few cars are believed to be affected. Right now, only 43 cars are being recalled and all of those cars were built at the Bowling Green facility between September 26th and October 2nd. There are also three Corvettes in GM possession that are included and while the details on how this problem was discovered hasn’t been clear, the fact that there have been no reported accidents leads me to believe that this was discovered during internal testing.

The fix should be as simple as taking your Corvette to the dealership, where a technician will inspect the questionable ball joint nuts. If everything is tight, you should be on your way quickly and if something is a bit loose, the technician may be able to simply tighten up the nuts. However, in the event that the ball joint nut has worked itself loose enough to let the toe link move around, the dealership may need to replace some rear suspension components – which will obviously take longer than tightening a nut or two.

John H. Webster wrote on January 31, 2015 - 9:12am Permalink
C7 Corvette Stingray interest
Dave N Noble wrote on February 20, 2020 - 10:14am Permalink
We had a complete collapse of the left rear suspension while on vacation in Colorado. The rear wheel was damaged & it slammed into the rear bumper breaking the clips. We had to collect nearly 7k from Hagerty for the damage because GM stated that this is not something that they would cover under warranty.

Tesla Contemplates A New Strategy for China Retail even As Sales Boom
Jay Leno on Elon Musk & EVs: “I Think He Should Get ... Credit"
END_OF_DOCUMENT_TOKEN_TO_BE_REPLACED