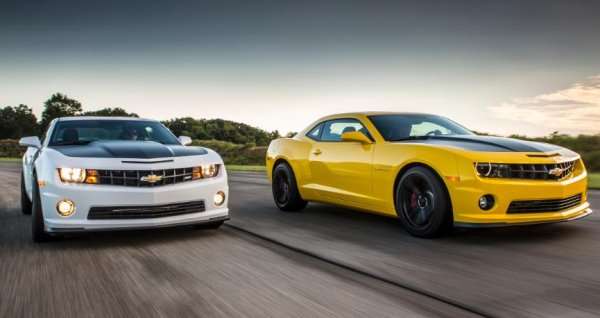 General Motors announced this morning that they are recalling every single Chevrolet Camaro from the current generation, with these 2010-2014 models facing similar ignition risks as the millions of recalled compact cars that lead to a handful of accidents and roughly a dozen deaths – while also issuing a stop-sale order to dealerships on both new and used Camaros.
Advertisement

The Chevrolet Camaro uses a ignition key design that has the key itself integrated into the plastic key fob with a switch on the side that pops the key out switchblade style. This is a cool design that is used by a bunch of automakers for a great many vehicles sold in the US. Unfortunately, the 2010-2014 Camaro ignition cylinder is located on the steering column and when the key is in the ignition, the rest of the key fob is sticking out of the column just above the driver’s right knee. Should the driver whack the bulky key fob with his or her knee while driving, it could force the key to turn from “Run” to another position.

Should the driver strike the Chevrolet Camaro key fob with a knee hard enough to force it out of the Run position, the driver will lose engine power along with power brake assist and power steering assist. There will still be brakes and steering, but without any power assist so it is much harder to steer and stop the car. This problem isn’t quite the same as the deadly ignition failures that have plagued General Motors over the past few months – as those vehicles have ignition cylinders that can shake their way out of Run while the Camaro ignition needs to be hit by the driver – but the result is very similar. Because of that, GM is making the quick decision to get all of the modern Camaros back to dealerships for repairs.

Solving the Camaro Ignition Problem
To address this problem, General Motors has issued a recall for every 5th generation Chevrolet Camaro sold since the car was reintroduced in 2009 for the 2010 model year. This means that 464,712 GM muscle cars in the US are being recalled in addition to another 46,816 units sold in Mexico, Canada and outside of North America.

The fix for the Chevrolet Camaro is simple. The nifty key-in-fob design will be swapped out for a new design that has a more traditional key that is separate from the fob. With this new design, there is a much smaller chance of the driver hitting his or her knee on the key since there won’t be a big plastic box sticking out of the ignition. The recall service shouldn’t take long, as the technician will only need to program the new keys and fobs to work with the car and owners will be on their way.

Dealers to Stop Selling Camaros
Finally, in addition to recalling over a half million Chevrolet Camaro coupes and convertibles around the world, General Motors has issued a stop-sale order to all applicable dealerships. Dealers are instructed not to sell or deliver any new or used Camaros from the 2010, 2011, 2012, 2013 and 2014 model years until the one piece key fob has been replaced by the separate key and fob design.

The total of 511,528 Camaro coupes and convertibles recalled is really a small drop in a very large bucket so the number of cars recalled isn’t as much of a big deal as is the fact that GM is recalling every single Camaro they have built since the car returned to the Chevy lineup. Recalling 3 million low priced compact cars has less of a negative impact on an automaker than does recalling a half million of their most well known car so this Camaro recall will prove to be more of an embarrassing black eye than it is a real safety concern. That is good for owners…but bad for GM.

John Cocktoastson wrote on June 23, 2014 - 1:27pm Permalink
Dealers are still selling Camaros just not delivering them to customers.
Demetrius wrote on June 24, 2014 - 8:22am Permalink
When will the key replacement begin?
Samuel Blea wrote on June 30, 2014 - 6:14pm Permalink
Can you please keep Camaro Owners up to date on this recall?
Teresa Cooke wrote on July 5, 2014 - 11:50am Permalink
I have just had the new key fob programmed for my 2013 Camaro at Edwards Garage in Rocky Mountain House Alberta and I am wondering if there have been any reports of any problems with the new fobs reported I am reluctant to pick up my Camaro and continue driving it as I had an incident with my car quitting I see the recall came out on June 13 2014 and do not feel confident enough time has passed since recall for any problems with new fobs very concerned can you please contact SAP?