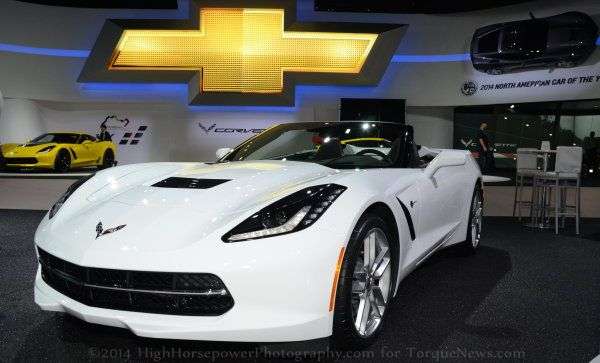 The General Motors recall bug has now turned its attention to the 2014 Chevrolet Corvette Stingray, with 712 units fitted with the awesome Competition Seat option being recalled over a concern that the a side impact air bag might not work as expected – but with a collection of very odd and very vague variables.
Advertisement

General Motors announced late last night that among a new batch of key related recalls is an air bag recall for the 2014 Chevrolet Corvette Stingray. 712 examples of the new Corvette are included in this recall and those models are specifically those Stingrays that are fitted with the race ready Competition Seats. It seems that these cars have an issue with the airbag system, although it is unclear as to exactly what is wrong with the air bag due to the unusual wording of the recall announcement.

Lots of Odd Variables for Airbag Failure
The recall notice explained that these Corvette Stingrays with the Competition Seats are being recalled because “an unbelted child and door trim may block the passenger seat side air bag vent in a deployment”. To fix this problem, dealerships will replace the passenger side airbag with a redesigned version and GM suggests that until the car has been repaired, owners should not let children ride in the passenger seat. I would suggest that they don’t ride in the driver’s seat either…so in other words GM doesn’t want any kids in the Corvette with Competition Seats until the passenger side air bag system has been repaired.

There are a few unusual key points to the 2014 Corvette Stingray recall. First, it specifies that the air bag vent may be blocked by a piece of door trim when there is an unbelted child in the front seat. Does that mean that the vent isn’t blocked by a part of the door panel when a child is buckled up? I would imagine that it has something to do with the location of the seat belt mechanism when it is not in use, but it is also odd that the door panel has some impact on the problem…but only when there is a kid in the passenger seat who isn’t buckled in? It is all odd – but it amounts to those 2014 Corvette Stingray owners with the Competition Seats getting a new passenger side airbag system in the very near future.

The Latest in Preventative Recalls
General Motors is in a position right now where people are questioning both the safety of their vehicles and the quality of their internal safety procedures so to help reassure buyers around the country, we can expect that the automaker will literally recall even the smallest, least significant issue over the next year or so. At first, these recalls only pertained to more pedestrian, high volume and low enthusiast following vehicles like the Chevrolet Cobalt, but the recent recall of every Camaro to replace the ignition key as a preventative move got the attention of the enthusiast world. Before the Camaro recall, car guys and car girls around the country hadn’t been affected by the string of recalls, but with every Camaro needing new keys and now 712 Corvette Stingrays with the Competition Seats needing new airbags – the situation has officially reached the most loyal of Chevy fans.

Fortunately, this is a recall problem that can be avoided by Corvette Stingray owners who bought the Competition Seats not having a little one ride shotgun, but that won’t be good news to a son or daughter who loves going on a high speed cruise with their mom and dad in the new Corvette.

Much like the Camaro ignition key replacement recall, this Corvette recall is more about being proactive and preventing a problem before someone can get injured so in the long run, it is more of another black eye for GM than it is a real risk to owners.