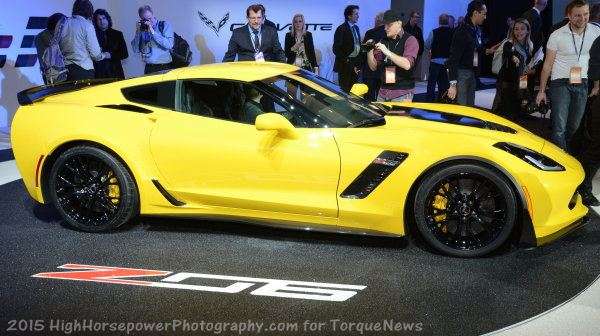 While we don’t know the exact number just yet, General Motors has reportedly turned in a record Nürburgring lap of some sort for the 2015 Chevrolet Corvette Z06 and according to chief engineer Tadge Juechter, we should all know how fast the C7 Z06 got around the Ring very soon.
Advertisement

The rumors of record lap times at the Nürburgring for the 2015 Chevrolet Corvette Z06 come from a discussion in the enthusiast community of CorvetteForum.com. While some of you might immediately think that this might just be fan forum fluff, this is an entirely different case, as this information comes from Corvette chief engineer Tadge Juechter in a section devoted entirely to sharing his wisdom.

Corvette Boss Fills Us In
In a lengthy discussion about the processes that led to the 2015 Corvette Z06 and how this new C7 Z06 differs from the previous Z06, Corvette chief engineer Tadge Juechter chimed in with a great deal of excellent information. He spoke about how the C7 Z06 came to be and why the company made some of the decisions that they did in engineering the most track capable Corvette of all time. You can view the rest of Mr. Juechter’s comments on the new Z06 here, but today we are focusing on the final line of his informative statement.

“Last week, we were finally able to confirm the performance of the car on a continuous lap of the Nürburgring”, said Juechter. “We are putting together the press release and will have the lap time and video out shortly. I can tell you we were more than satisfied with the results.”

Due to the nature of the post on CorvetteForum, it is unclear as to exactly when his comments were made so it isn’t totally clear when “last week” might have been, but even if that last week was two weeks back, I have to think that the announcement has to be close.

Guessing at the Times
Now, if you read Mr. Juechter’s comments on CorvetteForum, you will notice that he doesn’t mention any sort of Nürburgring record for the 2015 Corvette Z06. I have added the “record” portion myself as, if nothing else, I would expect that the C7 Corvette would at least set the new bar as the fastest American production car to lap the Nordschleife. That record is currently held by the Dodge Viper SRT10 ACR, which turned a lap of 7:12.13 back in September of 2011. Back then, that record time for the Viper was also the production car record, but since then, the Porsche 918, the Lamborghini Aventador SV and the Nissan GTR Nismo has since run quicker laps around the 12.9 mile road course.

In other words, I expect a lap time that will be no slower than 7:10 and while I don’t know that GM would be able to get the C7 Corvette Z06 into the hallowed 6 minute range – a lap time of 7:08 would allow the new Corvette to also beat out the Nissan GTR.
Needless to say, as soon as GM announces the official Corvette Z06 Nürburgring lap times, you’ll find the full details here on TorqueNews.com.

John Galt III wrote on June 9, 2015 - 4:09pm Permalink
The Corvette C7R has two factory entries at this weekend's 24 hours of LeMans, the only sports car race anyone cares about worldwide. The Corvette factory team has already won the 24 hours of Daytona and 12 hours of Sebring this year in the GT division so if Corvette can pull off another win at LeMans this year and then announce a world beating Nurburgring time that would be icing on the cake. Since 2000, Corvette has been the most successful make by far for 'street' sports cars at LeMans. Their 2 car team has this record: Wins - 7 2nd - 8 3rd - 3 4th - 4 That is against factory teams from Ferrari, Porsche, Aston Martin and so forth.
John Galt III wrote on June 17, 2015 - 8:36pm Permalink
Corvette wins again - 8 wins in 16 years Next Year Ford will be there with (3) new incredible sporst cars. Prediction: USA 1, 2 &3 just not sure of the order. If you have never been to Lemans, only one word - go. Next year will be amazing.