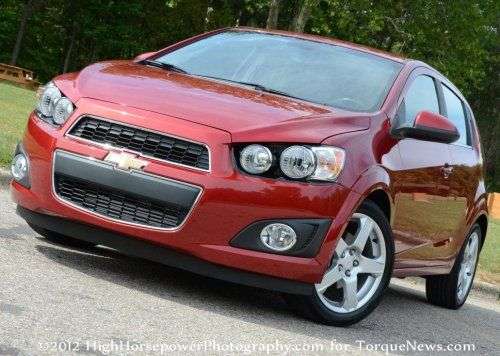 General Motors was one of the weakest auto companies in the US market in September 2012 with a year over year growth of just 1.5% but that slight increase allowed them to beat cross-town rival Ford Motor Company en route to once again being the bestselling automaker in the US by a pretty comfortable margin.
Advertisement

General Motors had their best September since 2008 last month with 210,245 units sold which was more than enough for GM to be the bestselling auto group in the US market – beating Ford by more than 35,000 vehicles sold.

“Passenger cars have been the launch point for a broad and deep GM product offensive,” said Kurt McNeil, vice president of U.S. sales operations. “Auto sales will continue to be a bright spot for the U.S. economy, which is particularly good news for GM as we walk into an even stronger cadence of new products in 2013 and 2014.”

Buick
The Buick brand was the top dog in terms of the current GM lineup with 14,673 new vehicles sold accounting for an increase of 7.9% over September 2011. Even though three of the four existing models in this affordable luxury brand posted negative growth last month, the quick popularity of the new Buick Verano helped Buick to post overall brand growth in September 2012. The only model that was in production at this time last year to show positive growth last month was the Buick LaCrosse with an increase of 5.6% with 4,580 units – which also made the LaCrosse the bestselling model in the brand lineup. The roomy Buick Enclave SUV was second in sales with 4,210 units sold while the new compact Verano sedan was third in sales with 4,042 new models sold. On the year, Buick has still posted negative year over year growth of 2% compared to the first 9 months of 2011 but with the rapid growth of the Verano, Buick could get back into the black before the end of this year.

Chevrolet
Chevrolet was the next best brand from GM in terms of growth with 149,801 accounting for an increase of 1.5% over the same period in 2011. Small, efficient cars were the big story in terms of growth with the new Chevy Sonic (shown on the right) improving by a stunning 427.7% while the electric Chevy Volt was second with an increase of 294.3% and the Chevy Cruze was third with comparatively balmy a jump of 42.5%. Those are certainly stunning numbers for the Sonic and the Volt but considering how impressive both of those models are in their respective classes – it comes as no surprise. In terms of sales volume, the top model from Chevy was the Silverado truck family with 36,425 units sold although that figure led to a significant decline in sales from the year before. The Chevy Cruze was second in sales with 25,787 units sold while the Equinox was third in total sales with 15,835 SUVs sold. On the year, GM has sold 1,420,383 vehicles which brings about an increase of 5% over the first three quarters of 2011.

GMC
The GMC brand technically posted a loss but with the lineup of trucks and utilities selling just 2 less vehicles in September 2012 than they did in the same month last year – their decline in growth was closer to zero than it was to a real negative number. The Canyon pickup was the top performer in terms of growth with a jump of 21.2% followed by the Savana van with an increase of 18.8% and the Acadia with an improvement of 16.5%. In terms of sales volume, GMC was led by the Sierra truck lineup with 13,636 pickups sold (down 1.9%) with the Terrain small SUV coming in second with 7,486 units sold and the Acadia was third with 6,159 units sold. On the year, GMC is holding onto a growth rate of 3.9% compared to the same period of time in 2011.

Cadillac
September 2012 was inexplicably a pretty bad month for Cadillac with 12,579 luxury vehicles accounting for a decline in sales of 1.3% compared to the same month last year. Of those models that existed at this time last year, only the Escalade EXT (pickup) posted positive year over year growth last month with an improvement of 8%. Every other model in the lineup posted a decline in sales from the year before. In terms of sales, the SRX crossover was the top model with 4,660 units sold while the CTS family was second with 3,103 sedans, coupes and sport wagons sold. In third place was the new Cadillac XTS full sized sedan with 2,506 units sold. More importantly, this past month marked the formal introduction of the new Cadillac ATS to showrooms around the country with 611 copies of the sporty, sleek new compact sedan hitting the pavement. On the year, Cadillac has shown an overall negative growth of 8.6% in moving 103,512 new vehicles. The ATS, the XTS and the upcoming new models including the luxury-coupe derivative of the Chevy Volt should help to insure that these negative brand growth numbers don’t continue for much longer.