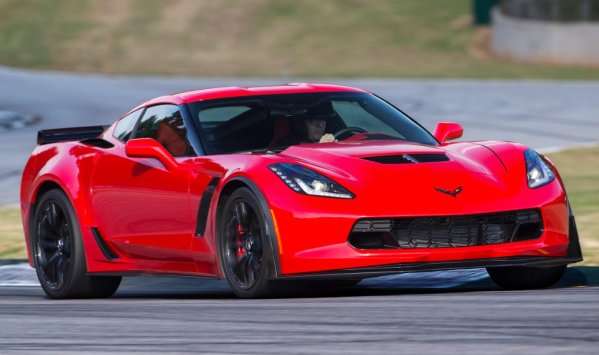 After talking yesterday about the rumored 7:08 lap time turned in by the 2015 Chevrolet Corvette Z06 at the Nürburgring, a new report citing information from General Motors unequivocally states that the 7:08 Ring time did not happen.
Advertisement

Just yesterday we brought you the hot rumor that the 2015 Chevrolet Corvette Z06 had made it around the famed Nürburgring in just 7 minutes and 8 seconds. This time was unofficial, coming from another publication who got that time from a trusted informant, and if that time turned out to be true, the new Corvette Z06 would be the 3rd fastest production road car to ever tear around the massive German road course.

Unfortunately, a new report from Road & Track refutes that rumor, including official word from General Motors that very plainly denies that the C7 Corvette Z06 made it around the Nürburgring in just 7:08.

Another Z06 Ring Time Debunked – for Now?
When the folks at Autoweek reported that an informant who spends a great deal of time at the Nürburgring claimed a 201 Corvette Z06 ‘Ring time of just 7 minutes and 8 seconds, it was the second rumored time we have seen for the new super-Vette. A few months earlier, a website now known for cooking up fake news announced that the Z06 had run a 6:59 lap, but that information was very quickly passed off as garbage.

However, when Autoweek announced that they had information which suggested a Nürburgring lap time of 7:08 for the 2015 Corvette Z06, we were far more inclined to take that rumor as true – or at least very possible. There was no official information to back up that smokin’ fast lap, but it is widely believed that General Motors is holding off on announcing their Ring record for the C7 Z06 until after the Nürburgring track management has gotten control of the ridiculous rule changes that implemented a speed limit on several portions of the 12+ mile track.

Really, the 2015 Chevrolet Corvette Z06 is billed as the most track capable Corvette of all time, so a lap time of 7:08 seems well within the realm of possibilities, effectively shaving 11 seconds off of the previous best Nürburgring lap by a Corvette, which were turned in by a C6 ZR1.

The 7:08 rumor had all of the requirements to be believable – coming from a reliable publication with information from a trusted insider who stated numbers that were very realistic. Unfortunately, based on a new report from Road & Track, this time is not legitimate.

GM: No 7:08 Z06 Ring Time
Road & Track hasn’t gone into much detail, but they reported that a trusted source within General Motors told them that the news of the 7:08 lap for the 2015 Corvette Z06 was not real. Of course, that was as far as the report or the comment went, but with Road & Track reporting this information with seemingly official support from the automaker, I am inclined to question the 7:08 lap time originally reported by Autoweek.

So, while we still don’t know how quickly the 2015 Corvette Z06 got around the famed Nurburgring, we know from Tadge Juechter’s comments that the automaker has set a new Corvette record Ring time with the C7 Z06 – we just don’t know how fast that lap may have been. Juechter has also teased us with mention of an upcoming Ring record announcement for the 2015 Z06, but there is no time frame set for when the company might announce the lap time for the 650 horsepower Corvette.