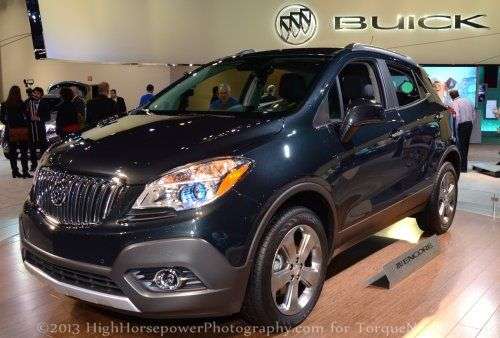 General Motors has issued a bazaar recall and a stop sale order for the 2013 Buick Encore over a concern that the steering wheel may not have been fastened down properly - which could lead to the steering wheel coming loose of the steering column while being driven.
Advertisement

This new 2013 Buick Encore steering wheel recall only applies to a small group of vehicles built between December 9, 2012 and December 28, 2012 so only 144 units are included in this recall. Of those vehicles, 59 have been sold to customers while the other 85 will be inspected by the dealerships which currently possess them. In addition to the recall, GM has issued a stop sale order of those 85 Encore small SUVs until the problem has been remedied.

In these 144 examples of the 2013 Buick Encore, should the steering wheel have not been bolted on properly it could progressively loosen. Over time, if the wheel is not tightened the wheel could get loose enough that it could no longer accurately control the direction of the vehicle and in the worst case scenario – the steering wheel could come free of the column so the driver would have no directional control of the sporty little Encore. Needless to say, that poses a serious risk to the occupants of the Encore along with everyone around them so GM is acting fast to get these SUVs back into the dealership for the necessary repairs.

This recall is set to officially begin on April 12th, when those 59 2013 Buick Encore SUVs will be returned to dealerships where a certified GM technician will inspect the steering wheel to ensure that it is fastened down correctly. From the wording in the recall, this will just be a matter of making sure that the nuts and bolts are all tight so this should be a nice quick, in-and-out kind of repair. According to Edmunds, GM has already reached out to these 59 owners and their vehicles are scheduled for inspection and any necessary repairs.