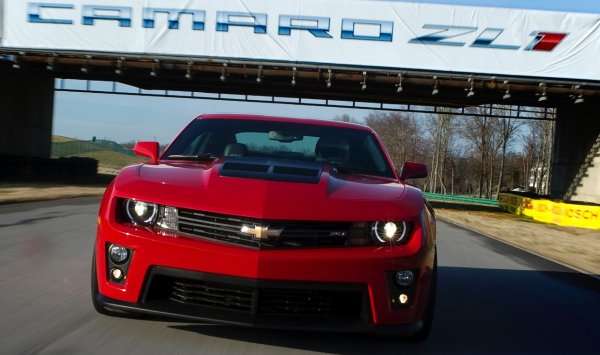 General Motors has announced that to prepare for production of several new models including the 2016 Chevrolet Camaro, the company will invest $174 million dollars in their Lansing Grand River plant to build a new stamping facility on site that will produce components for all of the vehicles build there.
Advertisement

I should point out that General Motors hasn’t actually stated that this $174 million investment is specifically for the 2016 Chevrolet Camaro, but they did say that this new facility will “produce stamping components for the Cadillac ATS and Cadillac CTS family of vehicles and a future product.” Back in 2012, General Motors announced that the production of the next generation Chevrolet Camaro would be moved from the Oshawa Car Assembly Plant in Canada to the Lansing Grand River facility in Michigan. We know for a fact that the Camaro will be built at Lansing Grand River so when you put 2 and 2 together, the odds are pretty good that the “future vehicle” in question is the 2016 Camaro.

“Lansing Grand River Assembly is known for the high quality of its work and the flexible manufacturing that has been a trademark since it opened,” said GM North America Manufacturing Manager Christine Sitek. “Today’s announcement demonstrates GM’s commitment to strengthening key plant capabilities related to quality and efficiency.”

The Future of Lansing Grand River
Lansing Grand River has been in business since 2001 and since then, the plant has been responsible for a variety of popular models including the Cadillac CTS in sedan, wagon and coupe form as well as the high performance V Series variants of the CTS lineup. LGR continues to build the new Cadillac CTS (now only available as a sedan) the final examples of the previous generation CTS coupe as well as the Cadillac ATS sedan and coupe. Beginning with the 2016 model year, LGR will also produce the Chevrolet Camaro and with that, the Lansing facility will be responsible for a trio of GM’s most crucial models. While it might seem odd to some that two different sized Cadillac sedans, a compact Cadillac coupe and a muscle car will all be built in the same plant, it should be noted that all of those vehicles are built on different variations of the GM Alpha chassis platform and with this latest investment of $174 million, LGR will begin stamping components that would have previously been produced elsewhere and shipped to Lansing.

Most importantly to some, the start of production of the 2016 Chevrolet Camaro at Lansing Grand River will allow GM to boast that they have an American made muscle car – a bragging that which only Ford has been able to claim over the past half decade. That might not seem like much, but to a devout muscle car lover who insists on buying American, having the Camaro built in Lansing rather than Canada could be the difference between that person buying a Mustang that is built in Flat Rock Michigan and buying the Camaro.

The 2016 Chevrolet Camaro is expected to debut at the 2015 North American International Auto Show in Detroit, but that has not been made official. In any case, we would expect it to debut early next year with the first units arriving before the start of the 2016 calendar year.