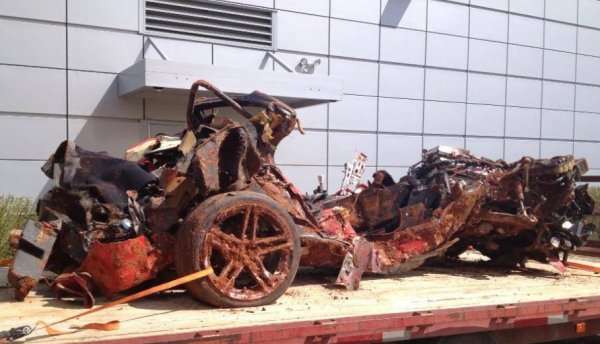 Although General Motors pledged right away to fully restore all of the eight cars swallowed by the sinkhole under the National Corvette Museum, company officials will meet with members of the museum’s team to discuss the possibility of leaving one or more of the sunken cars in their damaged state to forever serve as a reminder of that unfortunate morning in Corvette history.
Advertisement

When the news hit the automotive world that a sinkhole had opened up under the floor of the National Corvette Museum’s Skydome, gearheads around the world were quick to point out that any car – no matter how badly damaged – can be repaired. While the end result of being fixed might technically be an entirely new car, anything can be fixed. With that in mind, it came as a pleasant (yet almost expected) surprise when General Motors announced that they would restore all right cars to like-new form. This put the troubled minds of worrisome gearheads at ease as we knew that all eight of those historic Corvettes would be back and better than ever.

However, as the extraction process began and we began to see the massive scope of damage to the Corvettes in the sinkhole, many people in the industry (including yours truly) voiced the opinion that perhaps one or more of the cars should be left damaged. While the sinkhole is an unfortunate part of Corvette history, it is still a major event in the history of the fabled American sports car and those who think that some of the cars should be left damaged believe that nothing better pays homage to the sinkhole tragedy than one of the cars swallowed by the earth.

Some people believe that all eight cars should be left as they were when pulled from the hole while others (like me) think that one or two cars would be enough. Well, it turns out that the folks at General Motors and the National Corvette Museum are listening, as the two groups will meet sometime next week to discuss the ongoing restoration process of these eight cars.

While I proposed that the Chevrolet Corvettes that should be left unrepaired should be the 1,000,000th and 1,500,000th models – since they were really only special because of their build sequence number – the real decision which (if any) cars to leave damaged will come down to the feasibility of fixing them. The eighth and final Corvette to be pulled from the sinkhole was the Mallett Hammer (shown above) and while several of the cars were badly damaged… the Hammer was unrecognizable. Every component of the car is destroyed so restoring will likely entail replacing every single part so it will only be that same car in name. Also, while the Mallett Hammer was a remarkable performance car, it didn’t have the same level of historical significance as some of the other cars (no offense meant to the good people who donated the Mallett Hammer).

Realistically, if it comes down to picking the cars which are the most severely damaged, it will most likely be the Mallett Hammer and the 1993 ZR-! Spyder Concept which was also very badly damaged.

On the other hand, the fact that the Ruby Red 40th Anniversary Edition Corvette has already been replaced by a generous donor who owned the identical car may lead GM and the National Corvette Museum to leave that car damaged. It was not among the more severely damaged vehicles so it doesn’t pack the same “wow” factor as the more severely damaged cars, but the fact that they now have another copy of that same car would allow the museum to park them side by side as a sort of before and after.

Regardless of what the GM and NCM official decide, we will continue to cover the long, painful process of repairing the eight historic Corvettes swallowed by the sinkhole and repairing the building itself.