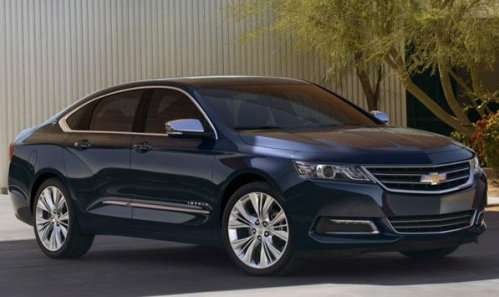 General Motors is reportedly planning to shut down one of the production lines at their Oshawa Ontario production facility, a move that could cost around 2,000 people their jobs.
Advertisement

The Oshawa Assembly Plant currently builds the Chevrolet Camaro, the Chevrolet Impala, the Chevrolet Equinox, the Buick Regal and the GMC Terrain on a variety of production lines but the line responsible for the Chevy Equinox and the Impala will soon be shut down.

General Motors announced late last year that the new Chevrolet Equinox would be built at the Spring Hill Tennessee plant while production of the new Chevy Impala will take place on the same flexible production line that currently builds the Buick Regal and Chevy Camaro. The upcoming Cadillac XTS premium luxury sedan will soon also be built on the Oshawa flexible line and the 2014 Chevy Impala (above on the right) – which is based on the same Epsilon II architecture as the Caddy XTS – will fit right in with the new flagship Caddy production line. GM has also announced that some Impala production will take place at the Detroit Hamtramck plant alongside the new Chevy Malibu and the Chevy Volt, leaving little need for the line currently building the Equinox and Impala.

General Motors has not issued an official statement on this nor have they notified the Canadian Union Auto Workers but should a closure of the Impala/Equinox line be true, this will likely cut about 2,000 jobs from the Oshawa plant.

There is some good news for those workers who are currently building the Chevrolet Equinox and Chevrolet Impala, as rumors suggest that the increased production need from the launch of Cadillac XTS and Chevrolet Impala could require Oshawa to add a third shift for the flexible production line. That third shift could add around 500 jobs and those positions would likely be first offered to factory workers who were laid off as a result of closing the Equinox/Impala line.

Questions were first raised when GM announced during contract negotiations with the UAW when the company announced that they would build future versions of the Chevrolet Impala at the Detroit Hamtramck plant. Many began suggesting that the Impala would be built exclusively in Hamtramck with the redesigned Chevy Malibu and the electric Chevy Volt but GM commented that production of the Impala in Canada would continue. However, late in 2011, GM announced an investment in the Oshawa plant which included adding 350 new jobs to build the next generation Impala. These 350 jobs could be part of the 500 needed to fill the new third shift for the flex line while the other 150 could technically be to deal with the added production need from the new Cadillac XTS.

The new Cadillac XTS flagship will be the only Caddy model built in Canada while the SRX is built in Mexico and the CTS sedan, CTS coupe, CTS wagon and new ATS sedan are all built at the GM Lansing Grand River Assembly plant.

While this comes as a hit for those who work on the current Equinox and Impala dedicated line, the popularity of the Chevrolet Camaro, GMC Terrain, Buick Regal and Chevrolet Impala combined with the projected success of the Cadillac XTS – Oshawa’s future in the GM plans seems to be very secure.