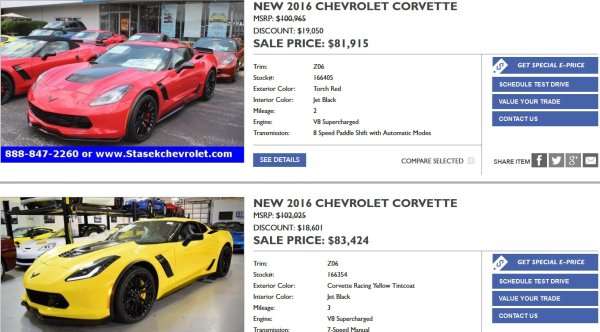 Get a 2016 Chevrolet Corvette Z06 at an Incredible Discount

Over the past few weeks I have been hearing about deep discounts being applied to the 2016 Chevrolet Corvette Z06, but after a friend sent me a link to some incredible bargains at his local Chevy dealership – I wanted to put together a piece about the opportunity to score an American supercar for way under MSRP.
Advertisement

The C7 Chevrolet Corvette Z06 is an incredible machine, with the 650 horsepower LT4 V8 and a state of the art suspension system making it one of the all-around best performance cars in the world. The Corvette Z06 has an MSRP ranging from around $80,000 up to $110,000+, but in looking around the internet a bit, I found that right now, you can get a new 2016 Corvette Z06 for well under MSRP. In some cases, you can get almost $20,000 off of a new supercharged Corvette, essentially offering buyers the chance to get a heavy optioned Z06 for the MSRP of the “base” 2016 Corvette Z06.

Huge Bargains on the 2016 Corvette Z06
I have seen quite a few people posting on Facebook groups recently about buying a new 2016 Corvette Z06 and in most cases, those new owners mentioned that they got a great deal. I have seen other conversations where prospective buyers were considering a new Z06 due to deep discounts and in checking the Chevy dealerships in my area, I found that there are Corvette Z06 coupes and convertibles in my area which are priced anywhere from $5,000-8,000 below MSRP.

That big of a discount is great, but it isn’t mind-blowing, but when a friend of mine sent me a link to his local Chevrolet dealership, which has a huge inventory of deeply discounted 2016 Z06 models – my mind was blown.

The dealership in question is Stasek Chevrolet in Wheeling, Indiana and according to their website, they are the largest Midwest Corvette dealer. Right now, they have seven examples of the 2016 Corvette Z06 on their website and while two of them are “only” discounted by $2,000 and $5,900, the other five are all at least $12,689 off of the MSRP and one of them is $19,050. That particular Corvette Z06 has an MSRP of $100,965, but after the discount, the sale price is $81,915.

This particular Corvette Z06 is a red 2LZ coupe with the Z07 package, the Performance Data Recorder, the 8-speed automatic transmission, the carbon fiber ground effects package and more – all for about the MSRP of the base model Z06. That is an incredible deal for someone looking to buy one of the fastest cars in the world, and in seeing pricing like that, it is no wonder so many people are buying a Corvette Z06 right now.

Thanks to Paul for the link!