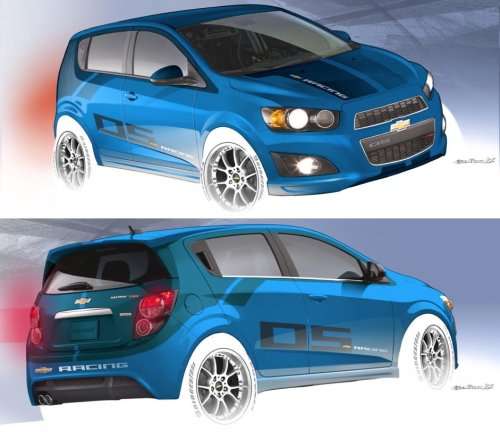 General Motors announced today that among the vehicles unveiled at the 2012 SEMA Show in Las Vegas will be the new Chevrolet Sonic B-Spec race car that will go head to head in a near-stock race class in the SCCA featuring subcompacts like the Ford Fiesta, the Fiat 500, and the Kia Rio – giving Chevrolet their first entry into this budding budget racing class.
Advertisement

The Chevrolet Sonic B-Spec race car has been designed to conform to the series rules for the B-Spec “stock” classes for the Sports Car Club of America (SCCA) and the Grand Am Series. The Sonic B-Spec will compete in the SCCA TCB class against those three popular subcompacts mentioned above plus the Mazda 2 and the Honda Fit. This class is comprised of cars with near-stock drivetrains, lightly modified adjustable suspension systems (with strict guidelines as to what is permitted), racing wheels/tires and an interior that has been stripped out and filled with only the base safety essentials. The idea is that by purchasing the B-Spec package, Sonic owners can equip their cars up for their favorite weekend racing series without performing modifications to the vehicle that cost a fortune – or that make the car undrivable on public roads.

“Sonic B-Spec concept demonstrates the car’s capabilities in the increasingly popular B-Spec subcompact classes in SCCA and Grand Am series,” said Jim Campbell, GM U.S. vice president of Performance Vehicles and Motorsports. “Sonic’s great balance of power and responsive handling make it a natural on the track – and a formidable competitor.”

The new Chevrolet Sonic B-Spec race car package focuses specifically on the suspension setup, adding front strut coil-over assemblies, rear shock coil-over assemblies, adjustable front stabilizer bar links, a rear axle shim kit and the necessary mounts to make everything bolt up to the stock dealership issued Sonic hatchback. The B-Spec package also adds an inlet air restrictor and a recalibrated engine control module and a retuned electronic body control module. The B-Spec package is designed to be applied to new Sonic Hatchback RS models equipped with the 1.8L engine and a 5-speed manual transmission – although the power is controlled by the inlet air restrictor to level the playing field for the less powerful cars in the class. The Sonic RS shown in the artwork on the right is fitted with slick racing tires and lightweight race times – items which may vary depending on the owner’s tastes.

On the inside, the safety modifications are left up to the owner of the Chevrolet Sonic Hatchback but the show vehicle headed to SEMA will feature a welded-in roll cage that meets SCCA specifications, a carbon fiber racing seat, a five point safety harness, a window side safety net, an interior helmet catch net (on the driver’s right side), a quick release steering wheel system and a fire extinguisher. All of these components are required for SCCA TCB competition but the brands chosen by GM may differ from those chosen by the person building the race-ready Sonic Hatch.

The 2013 Chevrolet Sonic B-Spec race car package is expected to go on sale in the first quarter of 2013 through approved Chevrolet Performance retailers.

Having had the pleasure to put a few hundred miles on the 2012 Chevy Sonic Hatchback, I expect that the B-Spec race package makes this one great handling compact to drive on the street and the track. This also gives GM the ability to go head to head with cross town rivals including the Ford Fiesta and the Fiat 500 (racing on the behalf of the Chrysler Group). A Fiat 500 claimed the driver’s championship for the 2012 SCCA TCB class with Jonathan Start behind the wheel.

We will be getting a better look at the new Chevrolet Sonic B-Spec race car when the 2012 SEMA Show opens later this month!

Anonymous wrote on October 20, 2012 - 10:45am Permalink
It's not clear to me from the article - is this going to be a factory option or is this just s show car to model what a B-spec Sonic would look like?

LG's New EV Battery Plant Is a Welcome News for Tesla
Tesla Giga Berlin's New Hurdle: It's Not Only the Gov't, but Now Tesla Itself
END_OF_DOCUMENT_TOKEN_TO_BE_REPLACED