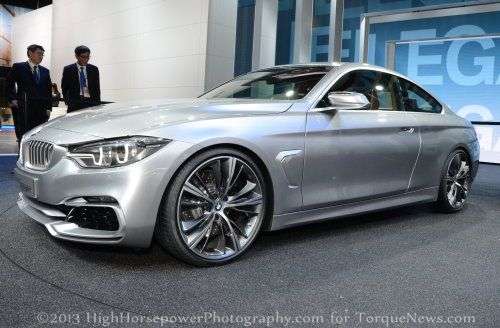 The 2013 North American International Auto Show in Detroit brought about several debuts for BMW but none drew as much attention as the debut of the new BMW 4 Series Concept – a 2-door luxury coupe that is likely to arrive in dealerships around the world soon.
Advertisement

While the sporty 2-door coupe shown on the right might carry the word “Concept” in its name at the 2013 Detroit Auto Show, the new BMW 4-Series that we can fully expect to see on dealership lots and showroom floors in the near future. It has been expected for some time now that the German automaker would split up the coupes and sedans of the popular 3 Series, leaving the 4-door models to continue on under the current name while the 2-door coupes and convertibles would become the new BMW 4 Series – and now here is our first look at that upcoming model.

This decision wouldn’t come as a huge surprise as the company already does this with the 4-door 5 Series sedans being split from the 2-door 6 Series coupes and ragtops with a similar naming strategy expected for the 1 Series and upcoming 2 Series.

While it may cause some uproar among BMW loyalists who expect to be able to go out and buy a 3 Series Coupe – especially the high performance M3 Coupe – the decision to split up the 3 Series sedans and coupes will not have any real impact on the consumer. In fact, if the production model BMW 4 Series Coupe looks as great as the concept car on display now at the 2013 North American International Auto Show, the consumer market is likely going to take to the new naming situation just fine.

You might be asking yourself – if the BMW 4 Series Coupe is definitely on its way, why are they calling this a concept?

The new BMW 4 Series Coupe Concept as it appears at the Detroit Auto Show is probably nearly identical to the production model that is set to debut in the near future but there are some items around the outside of the vehicle that could either disappear between concept and production or they could just be features of higher end models. The super aggressive front fascia looks awesome with the massive flares on the outer corners with low profile fog lights tucked neatly above but in all reality, this front end design is probably a bit too aggressive for the standard production BMW 4 Series.

That doesn’t mean that we wont see this front end exactly how it is on something like a high performance M Division car (presumably the M4 Coupe) but for the standard entry level 4 Series Coupe, I would be pretty surprised to see the lower front fascia hit production. It will also be interesting to see if those slick looking LED-trimmed headlights make it through to production as, while they unquestionably look great, they are also quite a bit more expensive to produce. Because of this, I would be surprised to see them on a lower level production model 4 Series but with the steady growth of LED technology to more and more models – there is no guarantee that we won’t see this headlight design across the entire 4 Series range.

Along the side of the new BMW 4 Series Concept Coupe we see a silhouette that is very much like the overall shape of the BMW 6 Series and for the German automaker to make a smaller, more budget-friendly version of the 6 Series Coupe could make the new 4 Series a major hit. The current 3 Series Coupe starts a touch under $40k while the 6 Series starts at almost $75k so to make something that sports similar styling to the current 6 Series with a lower price tag could provide some instant popularity to the 2-door models formerly flying the 3 Series flag. The sides of the BMW Concept 4 Series Coupe wears a set of huge, intricate rims that might be a stretch for production (again, at least with lower trimlines) and that vent on the front fenders might be a little out of place on an entry level 4 Series Coupe – although it would be right at home on the BMW M4.

Out back, the BMW Concept 4 Series Coupe wears a lower fascia that is every bit as aggressive as the front end and like the front end – I wouldn’t expect this look to arrive with the production model. Again, it looks great but it is probably a little too aggressive for the buyer looking to get into an entry level BMW 4 Series Coupe.

As part of the veil of the “concept” term, the BMW 4 Series Coupe didn’t come with any drivetrain specifications but if this is truly to be a 2-door version of the 3 Series sedan, the new 4 Series will likely come with the same engine options as the top selling sedans (and similar options to those from the current 3 Series Coupe and Convertible). This means that the BMW 4 Series Coupe lineup will likely be comprised of a 428i, a 428 xDrive (all wheel drive), a 435i, a 435is and a 435i xDrive while the Convertibles would come in the same 428i, 435i, and 435is forms but for the droptop 4 Series, all wheel drive is still a question mark.

The production version of the new BMW 4 Series Coupe is expected to debut sometime this year and when it does, should it look anything like the concept car currently on display at the Detroit Auto Show – BMW enthusiasts will be quick to forget any grumbles about the lack of a 2-door 3 Series.

Check out our gallery on the right for a closer look at the BMW 4 Series Concept Coupe by clicking any of the thumbnails above and stay tuned to TorqueNews for all of your comprehensive 2013 NAIAS coverage!