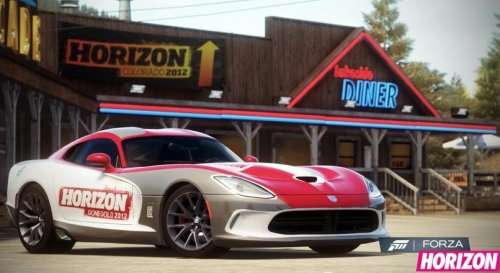 Early this morning, the first playable demo for the new (highly anticipated) racing simulator Forza Horizon arrived in the Xbox Live Marketplace, offering gamers their first experience racing in the open world, at night and on dirt in a Forza series game with the first drivable cars being the 2013 SRT Viper GTS and the Mitsubishi Evolution X.
Advertisement

If you are reading this and you somehow do not know about Forza Horizon – it is the first ‘open world’ racing simulator in the Forza racing series for the Xbox 360. Forza Horizon is also the first game in the series to feature night time driving and off-road racing, along with new features including speed trap events that all work with the familiar Forza Rivals system.

The Forza Horizon demo opens with a long lead in video that shows tons of people at the Colorado-based Horizon Festival which features live bands, beautiful women and some of the hottest racing action in the US. The video cuts away to a side panning side shot of the 2013 SRT Viper GTS with background radio coverage inviting racers to head to the Horizon Festival when fictional street racing legend Darius Flynt blasts past in his Ferrari 599XX. At that point, you are given the controls to the new Viper as you race to the entry point of the Horizon Festival racing area. If you beat him – nothing happens but racing the new Viper is a great start to the new demo.

The first race in the Forza Horizon demo is the Recaro Rush – an off-road race for which you are required to buy an all wheel drive vehicle and as you visit the dealership, only the Mitsubishi Evolution X is available. The race is a point to point event on a fairly narrow, rally style track that ends up on tarmac with the competition vehicles including the Lancia Delta, the Lancia Delta S4, the SVT Raptor F150, the Peugeot 205 T16, the Audi Quattro, the Mercedes Benz AMG ML63 and the 2011 Subaru WRX. Once you win this race, you unlock it in the Forza Rivals mode that pits you against another real world gamer as you attempt to cover the same course free of competitors (shy of the ghost that you are racing against). Every event on the Forza Horizon becomes a Rival challenge once you have completed the event in normal season play mode.

Next, you are invited to free roam over to the Mustang vs Mustang Showcase which puts you in a 1970 Ford Mustang Boss 429 against a Mustang P51 fighter jet in what is surely the most unusual Forza race to date. If you beat the plane from point A to point B, you win money and unlock this event in the Rivals mode but you also win the car as part of the “invite only” showcase series.

Finally, once you get a phone call inviting you to drive your Evo X to a cell phone tower to participate in a big street race featuring a collection of ultra high performance vehicles. Since the Evo isnt fast enough, the Forza Horizon demo places you back in the bright yellow 2013 Viper to race against a Ford RS200, a Lamborghini Murciélago SV, a 2013 Ford Shelby GT500, a 2013 Chevrolet Camaro ZL1, a 2012 Nissan GT-R, a RUF RGT8 and a Ferrari 458 Spider. Once you have beaten this race, it unlocks for a Rival Challenge and the demo is basically complete but you can continue participating in the Rivals portion of those three races.

In addition to the three basic races featured in the Forza Horizon demo, we get to experience the free roam portion of the new game that includes both speed traps and speed zones that act as fluid, in-game Rivals events. As you blast past the speed traps, it records your speed and adds it to the leader board where you can see how fast your friends hit the same area. You can also see the fastest times in the world and work to rank yourself higher on the list. The speed zones are similar to speed traps but this feature records your average speed over the course of a short area with the same leader board setup when you are finished.

Some other interesting features of Forza Horizon not found in the prior Forza Motorsport games includes the voice activated GPS system (for those who have the Kinect system), a variety of unique radio stations that you can flip through while driving and a map system that turns the roads lighter as you travel them – showing you where you have traveled in the virtual world of Forza Horizon. Another new aspect of Horizon is the addition of uninvolved traffic vehicles and the demo features models like the Audi A4, the Ford Explorer, the Toyota Prius, the Ford Super Duty, the Ford Taurus, the Chrysler PT Cruiser and the Toyota Camry.

I spent a few minutes this morning playing the new Forza Horizon demo and my first impression is a very good one. This game packs all of the wonderful driving dynamics that we have come to expect from the Forza Motorsport series into a real world setting that has proven to be very popular in other games like the Need for Speed series. However, Forza Horizon does so with a touch of realism that is often lacking in other open road racers. Based on the results of the first three races, it is quick and easy to make money including a mileage bonus for every event run plus bounties for the Rivals events. As a devout FM4 gamer, I do find Horizon to be a little “looser” when you are racing on concrete but the discussions from game maker Turn 10 leading up to the debut indicated that the roads would have a dusty, unprepared finish that is unique from the ultra grippy tracks in Forza Motorsport 4. Other than that, the driving characteristics are very familiar and the dirt racing appears to be very well done.

Based on the little that is available in the Forza Horizon demo, I cannot wait for the full version of the game to arrive on October 23rd. This demo is worth every second that it takes to download and if you plan to buy the full Forza Horizon game and play it online before the end of November, you will get a free 2013 SRT Viper GTS with a unique livery (shown above on the right).

Notoriousbeatz wrote on October 10, 2012 - 12:37am Permalink
The first Forza motorsport did have night racing.