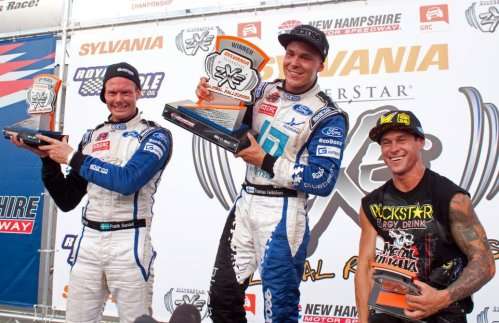 Tanner Foust was a dominant force at this past weekend’s Global RallyCross event in New Hampshire in both his heat race and the final run for the win but a rare accident on the last lap in the last turn gave Toomas “Topi” Heikkinen his second straight GRC win – and a powerful lead in the 2013 championship standings.
Advertisement

Even though the New Hampshire Global RallyCross event had the smallest field of the 2013 GRC season, the return to American soil came with a return to the exciting track design that helped the GRC boom in popularity in 2012. This included a mix of dirt and tarmac with a couple tabletop jumps, the strategic “joker” lap and the “crossover turn” – a curved metal ramp that stood as the final obstacle between the drivers and the finish line. This same crossover ramp turn took Ken Block out of contention last year when he came in a bit too hot and drove off of the back side of the turn so for this year’s event, a strong guard rail system had been installed but that didn’t make the turn any more treacherous. In fact, it was that final turn that forced Tanner Foust to make a rare error…an error that cost him the certain win.

In the first heat race of the day, Nelson Piquet Jr, Ken Block, Brian Deegan, Scott Speed and Dave Mirra took to the track to battle for the first two transfer spots into the final race of the event. Ken Block was the fast qualifier for the event and his speed was instantly obvious as he got a great start en route to an early lead. Brian Deegan challenged a bit early on in the heat but his race with Dave Mirra for the second transfer spot allowed Block to drive away to a very east win. Deegan was able to hold off Mirra for the second spot, leaving Mirra, Speed and Piquet to move onto the Last Chance Qualifier (LCQ) race.

The second heat of the New Hampshire Global RallyCross event saw Toomas Heikkinen, Steve Arpin, Bucky Lasek and Patrik Sandell enter the grid. Topi got out to the quick lead while his teammate, Patrik Sandell battled with Steve Arpin for P2. ON the second lap of the race, Sandell went hard into the dirt chicane and shoved his way past Arpin to claim the second spot before spending the next 4 laps of the heat hounding Heikkinen. Topi was able to hold Sandell off with both teammates guaranteeing their spot in the finals with Arpin and Lasek were sent on to the LCQ.

Heat #3 featured Travis Pastrana, Tanner Foust, Bryce Menzies and Svere Isachsen with Pastrana starting alone in the second row due to a poor qualifying effort. After a bad launch by Menzies, Pastrana was able to make an aggressive move as the field entered the first turn and he made a real run for the top spot before Tanner Foust slid out into the Pastrana’s Dart just enough to send the Dodge a bit wide. This allowed Foust to secure the lead and a similar tap from Svere Isachsen forced Pastrana to drop back into third. A few laps later, Pastrana pulled his car off of the track due to a severe vibration but it wouldn’t have made much difference as Tanner Foust had pulled out to a gigantic lead. Svere Isachsen held the second spot and even with a last lap, last turn spin by his blue Subaru – Isachsen was able to transfer to the finals while both Dodges were sent to the LCQ.

The Last Chance Qualifier saw Pastrana, Speed, Lasek, Piquet, Menzies and Arpin fighting for the final three starting spots in the 9-car final race. On the launch, Scott Speed jumped out to a quick lead but as the field entered the first set of turns, Travis Pastrana maneuvered last to take the top spot and he never looked back. Pastrana and his Red Bull Racing Dodge Dart drove to an easy win with no real opposition. However, the race for second and third was a hot one and when Bryce Menzies stalled his Dart on the metal crossover ramp – the ensuing pile up gave pretty much everyone in the field a shot at the finals. Scott Speed grabbed the second spot while Nelson Piquet Jr and his Mitsubishi Evolution ran in the third and final transfer position until Bucky Lasek forced his Subaru past Piquet to claim the last ticket into the finals.

The finals saw nine high performance all wheel drive compact cars battling for the win over a three row starting grid. Row 1 was made up of Block, Heikkinen and Foust. Row 2 included Isachsen, Sandell and Deegan while row 3 was comprised of the three drivers from the LCQ – Pastrana, Speed and Lasek. All nine cars got off to a good, clean start and as the field raced into turn 1, Ken Block, Topi Heikkinen and Tanner Foust battled for the lead but as the field moved out of the chicane, Tanner Foust was up front with Patrik Sandell was second and Topi Heikkinen was third. Deegan settled into the fourth spot while Block was in the sixth spot and Pastrana was seventh. The hottest battle early on was between teammates Heikkinen and Sandell while Foust was seemingly driving off into the sunset with the easy win. It would remain this way up front until the 9th lap of the race when Sandell took the longcut joker lap – allowing Heikkinen (who had taken the long cut early in the race) to claim the second position. More importantly, Topi quickly closed ground on race leader Tanner Foust but with just over a lap left, Heikkinen would need a miracle to catch Foust’s super fast Fiesta rally car.

Remarkably, the miracle came in the final turn of the last lap of the race. As Tanner Foust approached the dreaded metal crossover ramp turn with Topi about a half a straightaway behind, Foust locked the brakes up and the nose of the car spun towards the outside of the turn rather than the inside. This caused the Rockstar Energy Drink Ford to go into the guard rail backwards – allowing Heikkinen to slip past and claim what turned out to be a surprisingly easy win. Before Foust could get back pointed in the proper direction, Sandell and Deegan were also able to get by him. This forced Foust into the fourth spot while Sandell finished second and Deegan third. Ken Block round out the top five – giving Ford each of the top five spots in the final.
This second straight win for Topi Heikkinen allowed the young gun to pull out to a big lead in the 2013 GRC championship with 76 points to Tanner Foust’s 51 points. Teammates at OlsbergsMSE Brian Deegan is third with 47 points and Patrik Sandell sits in the 4th spot with 46 points.