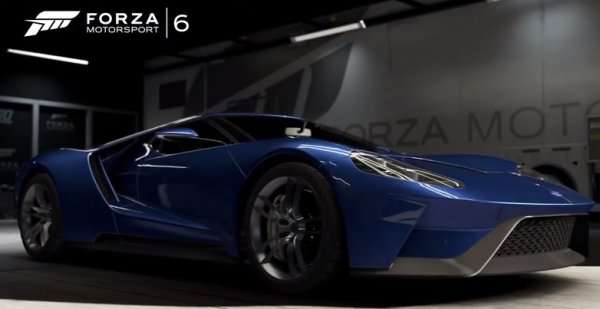 The Ford GT supercar will make its virtual debut in the Xbox One racing simulator Forza Motorsport 6 when the new game debuts on September15th, but you can see and hear the new Ford supercar in the first Forza 6 trailer video today.
Advertisement

The Forza Motorsport series is the leader in the world of console racing simulators and with Sony’s Gran Turismo 6 nipping its heels of Forza Motorsport 5, the folks at Turn 10 have announced that Forza Motorsport 6 will hit stores on September 15th, 2015. We first learned of Forza 6 when the new Ford GT supercar debuted back in January at the 2015 Detroit Auto Show, but at this week’s Electronic Entertainment Expo, it was made official that the new game was coming to Xbox One in September.

To make sure that they got plenty of attention for this big announcement, the first trailer video for Forza Motorsport 6 was introduced with the official release information, giving us a chance to see and hear the gameplay. Also, this video gives us a quick peak at some of the cars in the new game. Not surprisingly, the new Ford GT is heavily featured in the first trailer and it will also be the cover car for the game packaging, but this new video lets us watch the new Ford supercar in virtual action.

Forza Motorsport 6 First Details
Before getting into the first trailer of Forza 6 and the gameplay action of the Ford GT, here is what we know for sure about the new game. First, it plays at 1080p and 60 frames per second, making it the highest resolution version of the legendary gaming series. Forza 6 will have at least 26 tracks including the Nürburgring and while they haven’t announced how many cars will be in the game, the trailer does reveal that there will be at least 450 vehicles in the Forzavista portion of the game, so we are guaranteed at least 450 vehicles in the game. Forza 6 will also be the first in the Forza Motorsport series to have rain during races along with day-to-night transitions. Finally, the multiplayer mode will now allow races with up to 24 drivers.

See and Hear the Ford GT
One point where Forza Motorsport 5 has been criticized in the sound of the cars, as some people insist that “every car sounds exactly the same”. As a gamer who plays both Gran Turismo and Forza Motorsport games, I don’t agree that every car sounds alike, but I do agree that with Forza 5, the sound of every car might not be accurate. In this first Forza 6 teaser video, you can hear distinct exhaust tones for the different vehicles and in these examples – the cars sound very much how they sound in real life.

Based on the trailer, I believe that the vehicle sound could be one area where Forza 6 improves a great deal and as such, this first video of the new simulator gives us a great chance to hear the new Ford GT roar. With the GT getting more attention than any other vehicle in this trailer, there is a ton of moving virtual footage of the new Ford supercar so this is a great clip for Blue Oval fans.

At the same time, if you are a fan of the Forza Motorsport series – this first teaser should really get your juices flowing. The game looks and sounds great, and in addition to the Ford GT, we get to see other vehicles including La Ferrari, a BMW Z4 race car, the KTM X-Bow, the Hennessey Venom, the Nissan GTR, the Lamborghini Aventador, the Tesla Model S, a Caterham race car, the Pagani Zonda R, the Lamborghini Huracan, a ’71 Boss Mustang, a Ferrari 458, the Pagani Huyara, the Audi R8, the 1857 Chevy BelAir, the Nissan GTR34 and the 2015 Dodge Viper.

So, whether you are interested in seeing the Ford GT in action or if you are just a Forza gamer in search of your first look at FM6, crank up your speakers and enjoy the first teaser video below!