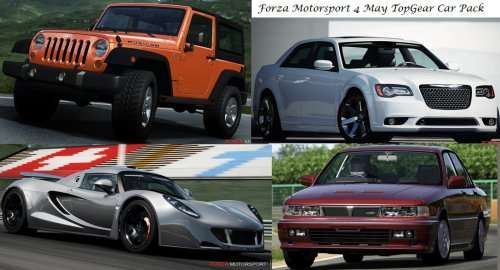 Late last night the folks behind the scenes of Forza Motorsport 4 announced the contents of the May TopGear car pack – adding 10 new vehicles to the incredible driving simulator including vehicles like the 2012 Chrysler 300C SRT8, the 1992 Mitsubishi Galant VR-4, the 1977 AMC Pacer X, the 2012 Hennessey Venom GT and more.
Advertisement

The May TopGear car pack for Forza 4 might be the most diverse yet, with a spread of vehicles that spans almost a half century and styles ranging from a rare 1,000hp supercar to an off-roading expert to some old school JDM sport sedans to a high performance commercial van. That short description sounds a bit odd to begin with but when you add an AMC Pacer, a Smart car and the new Chrysler 300C SRT8 – you see that this is truly a group of vehicles that offers a little bit of everything.

The May Forza 4 car pack then jumps to the present beginning with the unique 2011 Ford Transit SuperSport Van. This roomy people-hauler is better known for being a shuttle bus and commercial vehicle but thanks to the engineers at Ford, this sport concept arrives in Forza 4 with 198 horsepower from a diesel engine. Finally, the newest car pack closes out with a quartet of 2012 model year vehicles beginning with the Smart ForTwo which is, in my opinion, the strangest car on Forza 4 now. Next is a pair of Chrysler Group vehicles including the new Jeep Wrangler Rubicon (seems like an odd pick for a game with no off-road events) and the awesome 2012 Chrysler 300C SRT8. Last, and most certainly not least, is the 2012 Hennessey Venom GT. Packing 1,000 horsepower and weighing just 2,685lbs, the Venom GT has the best power to weight ratio on the market today.

The May Forza 4 car pack costs 560 Microsoft points ($7 US Dollars) and unfortunately for those of us who bought the Season Pass, this is the first car pack not included but what is seven bucks, right? The car pack will be available online next Tuesday, May 1st and along with the new car pack will come the new May Rivals events – including an event specifically for the 2012 Hennessey Venom GT that could win you a unicorn car from Turn 10.

Check out the video below for a look at these ten new vehicles coming to Forza Motorsport 4 next Tuesday. There is a heavy dose of in-game footage of the Venom GT, the Wrangler and the 300C SRT8 but there seem to be no shots of the Austin Healey so perhaps the look of that new car is a surprise.