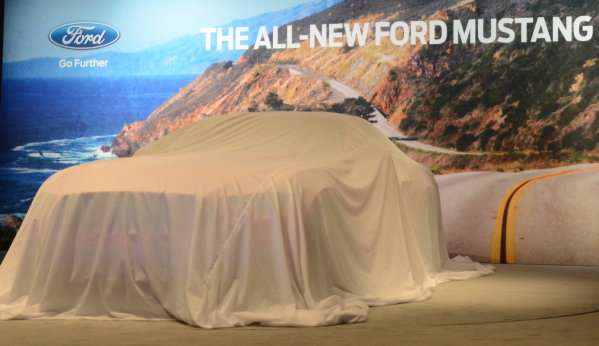 Since well before the 2015 Ford Mustang was introduced to the world last December, the motoring community has been debating what the next generation super-Stang would be called and according to a screen shot from the Ford Motor Company order bank software – the top of the line S550 Mustang could once again wear the SVT name.
Advertisement

If you have spent the last decade or so under a rock, I should start by explaining that the top of the line, highest performance version of the Ford Mustang since 2007 has been the Shelby GT500. Prior to the modern GT500, those folks who wanted to go really fast in a stock Mustang would have looked to purchase an SVT Cobra in the 80s, 90s, 2001, 2003 and 2004 with the most powerful of those models being the supercharged “Terminator” Cobras from the 03-04 model years. The modern GT500 followed closely in the supercharged footsteps of the Terminators and with power numbers reaching up to 662 horsepower for the most recent Shelby Mustang – the GT500 has done a fine job of representing the ultimate in Mustang performance.

However, when Mr. Carroll Shelby passed away in May 2012, the Mustang world was left wondering if the name of the legendary racer and tuner would continue into the generation that begins with the 2015 Ford Mustang.

We have seen a collection of what many people believe to be the next highest performance Ford Mustang in mule form on streets around the Metro Detroit area and over the past few months, it has been expected that this car would indeed carry on the Shelby name, but rather than GT500 this new car would be the new GT350. However, with a huge batch of dealership order bank screenshots hitting the internet in the past week, we are wondering if the top of the line performance version of the 2015 Mustang might not return to the SVT badging rather than Shelby and if that is the case – we wouldn’t expect this car to be called the GT350.

The dealership order banks list a variety of juicy bits of information that we had not previously seen including option pricing for many of the 2015 Ford Mustang trimlines. The screen shots that we went over yesterday (which have since been removed by that website) showed option pricing for the EcoBoost and GT, but the images posted by our friends at Mustang6g.com offer an even more interesting piece of information that we didn’t see yesterday – line items which clearly reference a new SVT model.

Coded as model P8J, this mysterious 2015 Mustang includes options like a Track Package, a Tech Package and a Navigation system but most importantly, it lists two different seat options – SVT Alantra (guessing that is supposed to be Alcantara) STS Ebony and SVT Leather STS Ebony. Those seat covering options confirm that P8J is most likely the top of the line package and the fact that they refer to SVT seats leads me to believe that the new super-Stang might be a Cobra and not a GT350/GT500. P8J also has a slightly unique lineup of colors with “only” 8 offerings: Competition Orange, Avalanche Gray, Triple Yellow, Deep Impact Blue, Magnetic Metallic, Race Red, Black and Oxford White.

Unfortunately, there are no prices listed for any of the 2015 Ford Mustang SVT model, but the use of the SVT moniker in the order bank is really the first indication as to what the new high performance Mustang might be called when it arrives. Mind you, SVT has always been involved with the premium performance Mustang so there is a chance that there could be a 2015/2016 Shelby GT350 Mustang with seats designed by SVT – but that seating information really spices up the discussion for those looking to get into an S550 Mustang with more power than what is offered by the 5.0L V8 GT models.