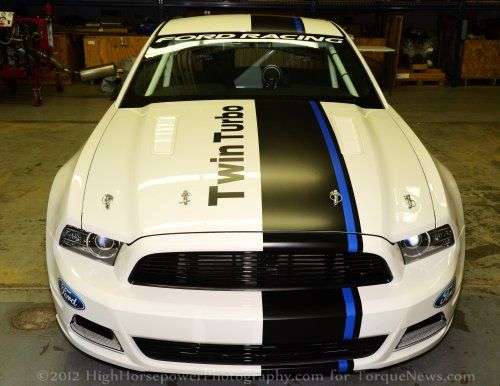 Every year, the folks from Ford Racing bring something to the SEMA Show in Las Vegas that is sure to be a showstopper and this year – that special something that will become the center of attention in the massive Ford Motor Company display is the incredible twin turbocharged 2013 Ford Racing Cobra Jet Mustang shown on the right.
Advertisement

You read that right – the 2013 Ford Mustang Cobra Jet shown on the right packs the familiar 5.0L V8 that is found in the Mustang GT, the Mustang Boss 302 and the Mustang Cobra Jet but unlike those naturally aspirated powerplants…this new 5.0L packs a pair of Borg Warner turbochargers that help this to be one of the fastest Cobra Jet Mustangs ever. While the majority of the specifications of the Twin Turbo Cobra Jet Mustang are still unknown, Ford Racing representatives told us that in initial testing, this new twin turbo Mustang has turned out quarter mile times in the high 8 second range. Numbers like that would allow the Ford Racing Mustang Cobra Jet with the new turbo setup to be among the absolute quickest factory drag packages among the Detroit Big 3.

“When a new generation of Cobra Jets arrived four decades later, they immediately began winning with a modern, fuel-injected 5.4-liter V8 topped with a belt-driven supercharger,” recalls Jesse Kershaw, Ford drag racing competition manager. “Over the past four years, the Cobra Jet has gone on to become both a fan and competitor favorite, the most successful late-model vehicle in drag racing.”

Some of you out there who are somewhat familiar with turbocharging technology might be asking why this Twin Turbo Cobra Jet Mustang would be better than the older supercharged or naturally aspirated Cobra Jet drag packages considering that turbochargers have an inherent level of “lag” while the turbochargers spool up to the required internal RPM to provide boost. To fix this problem, Ford Racing has worked with Borg Warner to build turbochargers for the Twin Turbo Mustang Cobra Jet that were initially intended for use on the EcoBoost engine of the production level Ford Focus ST and these tiny turbos provide gobs of boost with almost no noticeable spool time thanks to their compact, lightweight construction.

“Ford has embraced turbocharging technology and a lot of our production engineers are working with the technology on a daily basis, so we have a lot of knowledge,” said Deneweth. “We decided to apply that knowledge to the Mustang Cobra Jet to showcase what our engineers and suppliers know how to do.”

Dave Born, who worked on the 3.5K twin turbocharged EcoBoost V6 in the Ford F150 joined the Cobra Jet team after helping move the boosted truck to production. Born had this to say about the Twin Turbo Mustang Cobra Jet: “When done right, turbocharging is just as good as or better than supercharging. To overcome the biggest perceived drawback of turbocharging – the lag – we’ve selected the smallest possible turbos that will give us the airflow we need,” he adds. “We’ve also got some other enhancements to help improve the responsiveness; we have very low inertia and very low internal friction.”

Perhaps the most unique aspect of the new 2013 Ford Racing Twin Turbo Mustang Cobra Jet is the turbocharger placement – with the tiny turbos tucked neatly behind the fog lights openings in the front fascia. The exhaust manifolds both actually head towards the front of the car rather than the rear, leading to the twin turbos mounted well ahead of the engine itself. This allows for very little piping before the compressed air heads into the large intercooler as it heads into the specially designed Twin Turbo Cobra Jet intake manifold. In addition to the portions of the turbocharging system, this boosted Mustang features a experimental Ford Racing block and the cylinder heads from the 2013 Boss 302 – complete with the variable valve timing system found on production Mustangs.

When Ford Motor Company first introduced the American media to the new 5.0L “Coyote” V8 ahead of the Detroit Auto Show a few years ago, there had been rumors that they were also working on a twin turbocharged version for the Shelby GT500. At that preview event, I spoke with 5.0L project leader Mike Harrison and I asked him whether or not there were any considerations for turbocharging in the near future – which he quickly put to rest, explaining that there simply wasn’t the room under the hood for the piping of a traditional turbo setup with the turbochargers mounted near the back of the engine. However, the new Twin Turbo Mustang Cobra Jet shows that Ford can indeed package a twin turbocharged Mustang in a way that offers plenty of space for all of the items added including the turbochargers, the piping and the massive front mount intercooler.

The only real bad news with the 2013 Ford Racing Twin Turbo Mustang Cobra Jet is that it is – for now – a concept. However, Ford ended the press release pertaining to the new drag strip package by saying that “one of the top reasons for a car company to go racing is the rapid learning curve it provides and the lessons that can be fed back into the vehicles customers drive every day.” It is no secret that Ford is planning a turbocharged production Mustang in the near future and while this twin turbo Cobra Jet is only a concept – it proves that Ford is indeed busy working with new forced induction versions of the powerful 5.0L V8. It should also be pointed out that the majority of the vehicles that have debuted as concepts at the SEMA Show have eventually become production models…although this Cobra Jet would likely follow in the footsteps of the other modern Mustang Cobra Jet race cars and it will not be street legal should it move on to production.