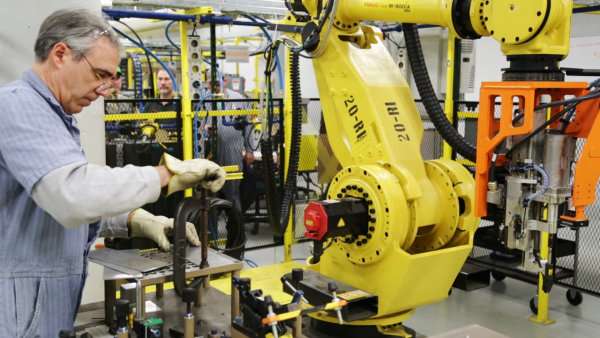 The 2015 Ford F150 production began at the company’s Rouge production facility, but with the automaker expecting more F150 demand than Rouge can provide, thousands of workers at the Kansas City truck plant are being trained to build the aluminum bodied half ton pickup.
Advertisement

Although the aluminum body of the 2015 Ford F150 has some skeptics questioning the new half ton pickup due to the possibilities of increased repair costs, Ford Motor Company and a great many folks around the industry (including yours truly) expect to see the 2015 F150 thrive in today’s market. Even if the 2015 F150 does cost a little more to fix when you are in a fender bender, the change to aluminum body panels brings the weight down and with that lower weight comes better capabilities, better fuel economy, better use of the available power and better resistance to rust – which is the killer of so many pickups.

With all of these improvements in mind, the 2015 Ford F150 stands a good chance of growing the already-strong F Series sales figures. The only problem with that increasing F150 sales growth is that the Rouge facility in Dearborn, Michigan - where 2015 F150 production was launched – could become unable to meet the demand. Because of the very real possibility for overflow F150 production, Ford Motor Company is training thousands of workers at their Kansas City truck plant in the same way that the Rouge facility workers were trained. This approach will help insure that the F150 pickups produced in Kansas City are every bit as good as those built in Dearborn.

The Skilled Trades Program
Ford Motor Company first launched their new skilled trades program at the Dearborn truck plant and when it was proven to be a successful means of getting thousands of workers comfortable with the new, advanced production equipment, the company introduced that same training program at the Kansas City plant.

Due to the unique methods of both forming and affixing the aluminum body panels on the 2015 Ford F150, special equipment and methods are required. To get the employees up to speed with these new methods and new equipment, Ford has introduced a training program that consists of some 400 hours of in-class and hands-on training sessions.

“Through this program, we have armed both our skilled trades and production workers with the skills necessary to produce the next generation of vehicle technology,” said Aris Janitens, Ford Launch Planning and Work Force Readiness manager. “Our workers now are able to deal with the latest in automotive manufacturing technology and, as a result, keep production on schedule to deliver best-in-class, quality trucks to our customers.”

Included in this training process are the following skills:
-New press that stamps out the aluminum cab and box production
-New hydroforming process to create support rails
-New chemical and heat treatment areas for improved corrosion resistance
-A closed loop aluminum recycling system that collects and sorts all leftover aluminum from 2015 F150 production
-500 new robots in the body shop to assembly the 2015 F150 aluminum body
-New paint processes that lead to more durable finishes on the 2015 F150

Production Capacity to Top 700k
The production of the 2015 Ford F150 began in Dearborn late last year and new F150 production is expected to start in Kansas City by the end of the first quarter – so it should start by the end of next month. When it does, Ford will have the ability to build around 700,000 F150 pickups a year and considering the recent upward growth in truck sales, Ford will need this extra production capacities going forward and with this new training program – that added capacity is there.