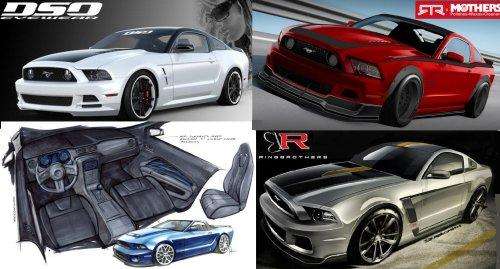 While we have already seen one tightly cropped shot of a Ford Mustang headed to the 2012 SEMA Show, today Ford Motor Company offered up artwork teasing four modified Mustangs that will debut in the flesh next week in Vegas – although none of these appear to be our “mystery Mustang” that we discussed on Monday.
Advertisement

The 2013 Ford Mustang will surely be among the most widely used show vehicles at the 2012 SEMA Show and the heart of that powerful hoofbeat will be based in the large, centralized Ford display with at least four examples of the mighty Mustang all dressed up and tuned up. Today, we get a look at four pieces of artwork depicting those Mustangs coming to SEMA that were built with help of other companies including the Ring Brothers, DSO Eyewear, Stitchcraft and Mothers polishes.

First off, we have a 2013 Ford Mustang Convertible powered by the 3.7L V6 base engine and a 6-speed manual transmission with the custom work performed by Sitchcraft. On the outside, a 3dCarbon body kit, a custom paint job and a set of massive wheels wrapped in performance rubber give this droptop Mustang a distinct look while a full Stitchcraft interior adds both luxury and a sporty, unique look. Stitchcraft fitted the 3.7L V6 with a nitrous setup and a FlowMaster exhaust system for improved performance while a Hotchkis coil over suspension package and a Wilwood brake kit combine to offer incredible handling.

The second 2013 Ford Mustang coming to the 2012 SEMA Show is a GT Coupe built by DSO Eyewear and fitted with the 5.0L V8 engine and the 6-speed SelectShift automatic transmission. DSO began on the outside with another 3dCarbon body kit including air vents on the front fenders, some huge black wheels wrapped in low profile tires and a pearl white/black paint scheme. Inside, Ford promises “extensive customization” but they do not offer any images or details shy of the fact that this 2013 Mustang will pack a big Rockford Fosgate sound system. Finally, an intercooled Whipple supercharger package increases the output of this Mustang from 420 to 750 horsepower.

Next up is another 2013 Ford Mustang GT powered by the 5.0L V8 but the Ring Brothers went with the 6-speed manual transmission for their 2012 SEMA Mustang build. The Ring Brothers have added an aggressive carbon fiber body kit complete with molded canards on the front corners along with some large, lightweight wheels and a unique paint job. No information has been offered on the interior but this Ring Bros 2013 Mustang GT will pack a supercharger, an upgraded suspension system, a Baer big brake package and high performance tires to improve on the already impressive performance of the new Mustang GT.

Finally, we come to the 2013 Ford Mustang GT powered by the 5.0L V8 and mated to the 6-speed manual transmission with the build being performed by Mothers, Autosport Dynamics and RTR. The Mothers’ design team began on the outside with an RTR carbon fiber body kit including some dramatic wheel flares that reach out over the big deep dish rims with a custom interior featuring Sparco race seats. Under the hood, the performance output has been increased to 650 horsepower (no details on how – but I suspect another supercharger) while a track ready suspension and braking system allow this car to corner as well as it launches.

TorqueNews will be on hand for the entire 2012 SEMA Show – bringing you all of the coolest new products and vehicles from the Las Vegas Convention Center!