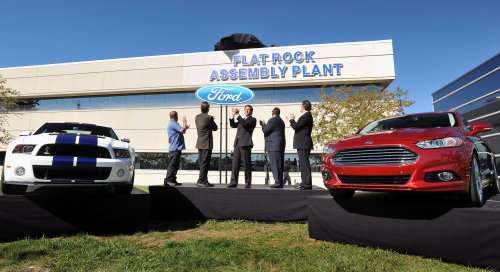 During a quick ceremony yesterday, Ford Motor Company officially renamed the AutoAlliance International production facility which will now be known as the Flat Rock Assembly Plant which will continue to serve as the production facility of the Ford Mustang as well as the future assembly point of the next generation Ford Fusion.
Advertisement

The plant located in Flat Rock Michigan has been known as the AutoAlliance International plant since Ford began building cars alongside Mazda in 1992, shortly after Ford Motor Company purchased 50% of the plant (and a hefty portion of Mazda). However, a few years ago Ford moved to rid itself of the Mazda ownership and a few months ago, Mazda ended the 25 year production run at the AutoAlliance plant – leaving the Ford Mustang as the only vehicle being built in Flat Rock. Ford has since announced that the plant will provide significant production volume of the 2013 Ford Fusion so with the end of the “auto alliance” between Ford and Mazda – Ford has moved to rename the facility as the Flat Rock Assembly Plant.

It should be noted that while Mazda has moved out and the AutoAlliance name has been dropped, Mazda Motors still owns 50% of the Michigan facility. Yeah…I think that it is odd, too. This is the first time that the Flat Rock plant has not built a Mazda product since the Japanese automaker purchased the facility in 1987. The facility had originally served as a Ford casting plant but when it closed in 1981, Mazda bought it and turned it into an assembly plant. At that time, the plant was named Mazda Motor Manufacturing USA with the company building the Mazda 626 sedan alongside the Mazda MX6 and the Ford Probe. The Flat Rock plant has been building every Mustang sold in the world since 2005 and will continue to do so once the Ford Fusion production begins.

“By fully incorporating Flat Rock Assembly into our manufacturing system, we are able to take advantage of internal efficiencies that will streamline our ability to produce vehicles,” said Jim Tetreault, Ford vice president of North America Manufacturing. “This is critical as we increase our capacity to meet growing customer demand for our products.”

In addition to renaming the “new” Flat Rock Assembly Plant, Ford has announced that they will be adding 1,200 jobs to the plant over the next year to handle the added need for production capacity brought on by the 2013 Ford Fusion. On top of those 1,200 jobs, Ford will invest $555 million dollars to build a state of the art body shop that will be able to produce a variety of vehicles, including the Mustang and the new Fusion. This new investment will include the addition of a new paint booth area featuring Ford’s “3-wet” paint process – a system which allows the company to paint vehicles more quickly and with less pollutants without any compromise in finish quality.

There had been speculation that when Mazda pulled out of the AutoAlliance International plant, the plant would be renamed but like many Mustang enthusiasts - I had hoped for something romantic like "the Mustang stable" - but in the real world something simple like "Flat Rock Assembly Plant" is far more functional.