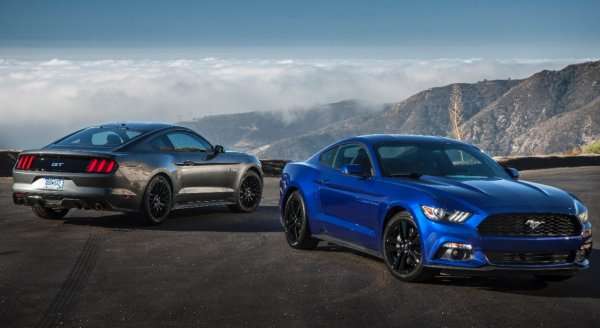 Ford to Offer Warranty-Friendly Tuner for the 2015 Mustang EcoBoost

The 2015 Ford Mustang will likely have the biggest performance aftermarket of any new car sold in the US and for those folks who want to squeeze a few extra ponies from their pony car without voiding the warranty, Ford Racing will soon offer up a tuning package for the Mustang EcoBoost.
Advertisement

One of the easiest way to pull some extra easy power from the 2015 Ford Mustang will be to purchase a “hand tuner” from a company like SCT, Superchips, DiabloSport or one of the various other companies that sell plug-in tuners for modern performance cars. These tuners can often increase power and, in some cases, performance as well, but in almost every case, these aftermarket ECU tuners will void your factory engine warranty. Many gearheads aren’t worried about that and hand tuners have grown to be one of the most popular go-fast goodies in the performance aftermarket world.

Fortunately, Ford Racing has rolled out their own line of tuning systems that add power to the 2015 Ford Mustang and best of all, the Ford tuners don’t void your factory warranty.

Ford Racing Tunes for the 2015 Mustang
While details are limited right now, the Ford Racing website has a page dedicated to talking about their new ProCal engine tuning systems that are currently only available for 2004-2014 models, but it will soon include the 2015 Ford Mustang. The current website talks about how the ProCal tuner is needed to get the most out of a Ford Racing cold air intake package or a Ford Racing supercharger package, so this current information pertains more to the Mustang GT. However, the folks at Car and Driver have reported that Ford Racing will soon offer packages for the 4-cylinder EcoBoost engines in the Focus ST, the Fiesta ST and the new 2015 Mustang EcoBoost.

No power numbers have been announced for the Ford Racing tuning package for the 2015 Mustang EcoBoost, but the Focus ST with the smaller 2.0L EcoBoost is expected to pick up an addition 90lb-ft of torque. In stock form, the Focus ST provides 252hp and 270lb-ft of torque, so in increase of 90tq would bring that figure up around 360lb-ft of torque and even with a much smaller gain of 50hp, the high performance hatchback would pack around 300 horsepower.

Guessing at the Mustang EcoBoost Gains
If the Car and Driver figure of 90lb-ft of torque gained with the Ford Racing tuner in the Focus ST proves to be true (and I have no reason to believe that is isn’t true), the powerful compact hatchback would be gain 33% more torque. If the Ford Racing tune for the 2015 Mustang EcoBoost offers the same 33% increase in torque would add around 105lb-ft, so the numbers would rise from 320lb-ft to somewhere in the area of 425lb-ft. That is some serious torque. In fact, that is more torque than you have been able to get from any stock Mustang GT, ever.

Look for Bigger Gains from Other Companies
The Ford Racing tune for the 2015 Mustang EcoBoost will be a real stunner if it can offer those estimated numbers above. Even if the 4-cylinder Mustang “only” gets the same increases as the Focus ST at 90lb-ft, it will still pack almost as much torque as the new Mustang GT. However, the fact that this engine tune from Ford Racing preserves the warranty and it 50 state approved leads me to believe that those folks looking to get as much power as possible from their tuner might find more power from a true aftermarket company. Obviously, Ford Racing was concerned about the longevity of the engine when designing this tune, as the company is responsible for any damages that occur due to the increased power. On the other hand, while aftermarket tuning companies certainly don’t want to hurt your engine with their product, they aren’t as concerned with the long term effects – nor are they worried about emissions on the same levels as the automaker. The tuning companies do need to conform to emission standards, especially in states like California, but those aftermarket companies are more capable of offering things like “track only tunes” that are far more extreme and far less fuel friendly.

Because of that, owners of the 2015 Ford Mustang EcoBoost who want the most power possible from their tune might be happier with a product from an aftermarket performance company, but those Mustang owners who want more power and full factory warranty coverage should love the upcoming Ford Racing ProCal tuning packages.

Richard dearth wrote on February 20, 2015 - 8:55pm Permalink
Looking for that tuner to give me 50 to 70 more horses without voiding the warrenty
frank wrote on May 14, 2015 - 8:18pm Permalink
me to
Sam wrote on November 6, 2015 - 1:03pm Permalink
As soon as its offered, I want one.
Steve wrote on July 9, 2015 - 5:34am Permalink
Anyone know if Ford Racing offers a tuner for a 2015 Mustang gt yet that won't void warranty?
arless wrote on August 31, 2015 - 11:48pm Permalink
The BAMA flash tuner from SCT is the ticket to the best tuner on the market. For $399.00 you get a hand held tuner and also you get free tunes for life of your ownership of the flash tuner.
John james wrote on January 9, 2016 - 7:44pm Permalink
Um No bama will leave you walking. Who knows who'll build the tune this week.
Wayne Rhodes wrote on March 4, 2016 - 3:49pm Permalink
That is great for an eco-boost but what about us 2016 Mustang GT owners we need a tuner also for our performance Mustangs as well.
blah wrote on May 4, 2016 - 8:27am Permalink
It's been over a year and nothing. Ford has never even publicly commented about doing this which makes me think this is just click bait.

LG's New EV Battery Plant Is a Welcome News for Tesla
Tesla Giga Berlin's New Hurdle: It's Not Only the Gov't, but Now Tesla Itself
END_OF_DOCUMENT_TOKEN_TO_BE_REPLACED