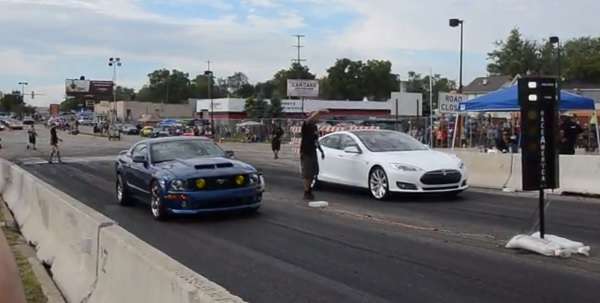 While racing at the 2016 Roadkill Nights by Dodge event in Pontiac, Michigan, a Tesla Model S went head to head on a slippery surface with a Ford Mustang GT, and the highly touted electric super sedan took a serious beating at the hands of the American muscle car.
Advertisement

The Tesla Model S is by far the quickest electric vehicle sold in the USA and since this big EV went on sale with the high performance P85D models, we have seen videos of these all-wheel drive beasts in action. In some cases, those videos show awful drivers getting beaten by the Tesla Model S, at which point the EV community will proclaim that the Tesla is the superior vehicle – even in the event that it was clearly a bad driver at fault for the loss.

Well, this past weekend, that shoe was on the other foot, as a poorly driven Tesla Model S was absolutely blown out by a Ford Mustang GT in a race where conditions greatly favored the AWD EV.

Roadkill Nights by Dodge
This drag race took place on Woodward Avenue as part of the legal street racing portion of the 2016 Roadkill Nights by Dodge event in Pontiac, Michigan. While the starting line area had been prepped with some spray-on traction aid, the uphill nature of the starting line (and the track as a whole) made traction very difficult for many vehicles.

While the vehicles which only spun two wheels struggled all night to get traction on the slick public street surface, all-wheel drive vehicles were able to get away from the starting line far quicker. A few 4WD diesel trucks and a couple of lightning-quick SRT Jeep Grand Cherokees laid down some of the most impressive runs of the day, but the driver of this Tesla Model S was not able to make good use of his traction advantage in this race against a Ford Mustang GT.

Mustang VS Tesla
The Tesla Model S in the far lane is presumably stock while the Ford Mustang GT in the near lane is very obviously modified. It is unclear which trimline of the Model S this is, but having seen this car out-launch and out-run a C7 Corvette Stingray later in the day, I am led to believe that it is a P85D model. In any case, it proved later that it could get down the track in a hurry, but on this run, it wasn’t meant to be.

Even though the Mustang GT was in the more slippery lane of the two, which also had a slight dip that causes manual transmission cars to roll backwards before the start, the Ford is able to get a great launch when the green light drops. On the other hand, the Tesla just sits there for a second before gently easing away from the starting line. By the time the Model S driver really put the hammer down, the Mustang GT was too far down the 8th mile track to catch and the muscle car took the easy win.

Now, had the Tesla Model S driver have gotten a better start, he would have most certainly stood a better chance of beating the Mustang GT in the same manner that he beat the stock-looking Corvette Stingray later in the day. However, this video serves to remind fans of muscle cars and EVs alike that a bad driver can transform a very fast car into a very slow car. Much like the Hellcat Challenger that was poorly driven en route to a beating by a well driven Model S, this Tesla loss was more about the driver than the car.

The worst part of this run was that it took place in front of a crowd of more than 30,000 people, comprised predominantly of muscle car fans who took this race as an opportunity to laugh at the EV world. The EV may have beaten the stock Corvette, but against a built Ford Mustang – the EV driver was caught sleeping.

JayZ wrote on August 23, 2016 - 7:44am Permalink
Ha ha this is a funny piece of news because unlike ICE cars, there is NO WAY to drive an EV poorly. You just set the Tesla up for max performance and floor the accelerator that's about it. So the only reason why it could have been beaten I suspect is because the Tesla S was not floored - its as simple as that. BTW you need to race it will a worthy competitor like a Porsche, not these crappy trucks from the last century.
Brand wrote on August 23, 2016 - 12:27pm Permalink
Sounds like someone's butthurt racing a 180k car and losing to a 25k car :P
Aangiolini wrote on September 2, 2016 - 10:07am Permalink
An entire article was written to make a bunch of whinny (and one not so smart) ICE car drivers feel better about getting their asses handed to them by a Tesla by telling them it's the driver not the car, look, here's a bad Tesla driver too. Sorry dude but it's the 3rd fastest car ever, I doubt anyone that actually has one is too butt heart over your comments, it's actually hilarious how pissed off you get because Tesla can take on any car and you can't even hear it coming. I'll be here butt hurt in my engineless silent fast as hell Tesla, you can keep your ICE car.
Octavio Salcido wrote on September 23, 2019 - 1:34pm Permalink
there is another race at the netflix series "fastest car" , where a tesla is beaten by two heavily modified vehicles, a ford mustang named beer money and a station wagon, the tesla owner is a boy that have a youtube channel named virgin vehicles or something so
yeat wrote on September 2, 2016 - 9:28am Permalink
Right........so that mustang goes 0-60 in less than 3 seconds? So either the Tesla was a rear wheel drive 60kw battery version or someone is full of crap. Probably the latter as there's plenty of your articles hating on Tesla. Because it takes an Alfa 4c towed on a trailer behind a model X racing against a 4c to still lose to it. Just ask Motor Trend. Your journalistic integrity is laughable, like trying to compare sales of the Model X with how the 3 will sell. How much are the manufactures paying you guys to write this FUD.