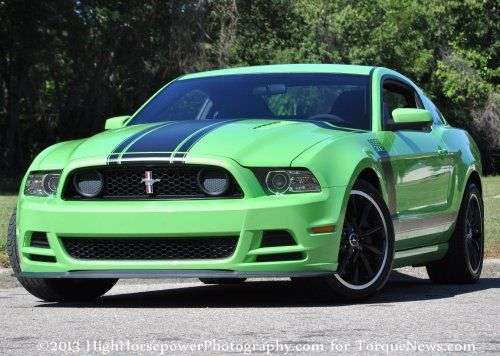 For the second month in a row, the Ford Mustang has outsold the Chevrolet Camaro but the huge differential in June 2013 sales between the two American muscle cars has allowed the mighty Mustang to pull into the lead in the battle for the 2013 muscle car sales title – a position claimed by the Camaro in each of the past 3 years.
Advertisement

June 2013 marked the second month in a row where the Ford Mustang outsold the Chevrolet Camaro after the Camaro claimed each of the first four months of 2013. While the Camaro has won twice as many monthly titles so far in 2013, several of the months where the Camaro lead the Mustang it did so with a fairly small margin. On the other hand, with the Mustang outselling the Camaro by a whopping 2.007 units – June 2013 marked the most lopsided monthly win in the last 18 month for the muscle car segment. Also, while the Dodge Challenger had a strong month in June with 5,101 units sold, the brawny Mopar muscle car fell well short of the monthly sales totals from the Camaro and Mustang.

In June 2013, Ford sold 9,243 Mustang coupes and convertibles. That was the highest monthly total for the Mustang in 2013 while also being the best month for the Mustang since June of 2012 when 10,263 examples of the original pony car were sold. On the other hand, the Chevrolet Camaro had its third worst month of 2013 with only 7,236 units sold and because of that rough month – the Mustang was able to post a pretty severe beating while also jumping back into the top spot in the battle for the 2013 annual muscle car sales battle.

Both the Camaro and the Mustang saw year over year declines in sales for June 2013 but the much bigger drop by the Camaro has allowed the Mustang to send a statement with one of the worst beatings in years. While the strong sales figures by the Mustang play an obviously large part of helping Ford climb back to the top of the muscle car sales charts, the bigger story is the poor sales for the Camaro. Since being introduced earlier this year, the refreshed 2014 Chevrolet Camaro has garnered a great deal of attention and it can be presumed that the slow Camaro sales right now are due to prospective consumers eagerly waiting for the new-look 2014 models. Should that be the case, the Camaro can expect a big spike in sales once the 2014 models hit showrooms. Not only will people be lining up to buy the 2014 Camaro but we can also expect deep discounts on 2013 model year Camaros that will bolster sales as well. However, once the next generation Mustang arrives in April 2014, Ford can expect a big spike of its own but that big increase in sales (of both 2014 and 2015 models) will come far too late to have any impact on the 2013 sales title.

Halfway through the year, the Ford Mustang has moved 43,111 units while GM has sold just 42,312 copies of the Chevrolet Camaro…amounting to a narrow lead of 799 units for the Mustang. Ford Motor Company is working hard to prevent the Chevrolet Camaro from winning its 4th straight annual sales title but for that to happen, the Mustang will have to continue to post strong numbers while also hoping for the Camaro to continue to struggle. Ford needs to try to build as much of a lead as possible so that the influx of Camaro sales that comes with the introduction of the 2014 model year vehicles won’t allow the bowtie clad coupes and convertibles to push the Camaro to its 4th straight annual sales title.