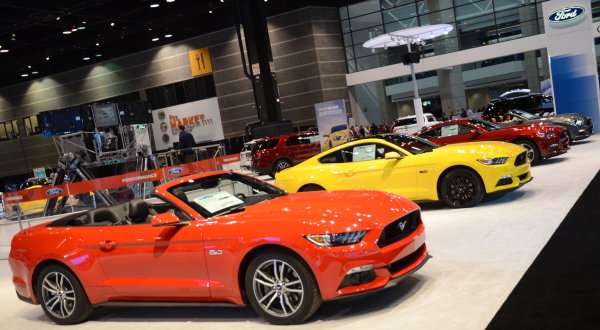 The Ford Mustang Outsold All Electric Vehicles Combined in 2015

The Ford Mustang had its best sales year in many moons in 2015, literally outselling the entire electric vehicle segment and reminding us that while there are people around the country who care about not using gasoline – high performance still reigns supreme in the good ol’ USA.
Advertisement

The odds are good that if you follow the American auto industry, you are aware that there are those folks in the electric vehicle (EV) movement who believe very strongly that we are within a few years of EVs overtaking internal combustion engines (ICE) in popularity. Based on the sales numbers from the EV segment for 2015 compared to the sales numbers from the muscle car segment – the shift to widespread acceptance of EVs is looking just as far away as ever. After all, before EVs can take on the high volume vehicles like the Toyota Camry or Honda Accord, they need to first beat niche market vehicles like the Ford Mustang, the Chevrolet Camaro and the Dodge Challenger.

As the least efficient cars sold in the US, American muscle cars are essentially the polar opposite of anything in the EV segment. If EVs are going to take over in the US, they will need to start by beating out those which sell in the lowest numbers, but even among the fuel-thirsty muscle car segment – EV sales prove to be only a drop in the bucket.

2015 EV Sales
Pinning down exact EV sales numbers can be tough due to the fact that some automakers don’t break out EV models from non-EV models of the same vehicle while others (read: Tesla) have traditionally avoided publishing exact sales numbers. That changed for 2015, as Tesla announced that they sold 25,202 examples of the Model S in the US, making the Model S the bestselling vehicle in the entire American EV segment.

In researching the sales numbers of other EVs in the US, I came across the monthly EV sales scorecard from the folks at InsideEVs.com – which is easily the most detailed and the most comprehensive EV sales chart I have ever seen. Thanks to their chart, I learned that the 28 EVs sold in the US during the 2015 calendar year accounted for a total of 116,099 vehicles sold last year. Even though there are more EVs offered for 2015, that number is down by roughly 6,000 units from the year before, so not only are EVs not creeping up on the rest of the market – they are actually losing ground. In a year where sales of pretty much every type of vehicle exploded, EV sales slumped.

That is not a good sign of pending world domination, but if you look at how those numbers compared to the muscle car segment – things look even worse for the loyal EVangelists who expect the end of gasoline in the next decade.

EVs Versus Muscle Cars
In 2015, there were 28 electric vehicles sold in the United States and those vehicles led to total sales of 116,099 units with the Tesla Model S leading the way with 25,202 units sold.

In 2015, there were 3 muscle cars sold in the United States and those vehicles led to total sales of 266,216 units with the Ford Mustang leading with way with 122,349 units sold.

That’s right – Ford sold more Mustangs in 2015 than all of the EVs combined and even though there are only 3 entries in the muscle car segment, the Mustang, Challenger and Camaro outsold every EV combined by more than double. When looking at the top cars from each segment, Ford had sold as many Mustangs by the middle of March as Tesla sold Model S sedans in the entire year. Sure, EV fans will point out that the Model S cost 2-4 times as much as the Mustang, but the fact that the Mustang outsold the entire EV segment (including low priced models) is clear proof that this widespread shift from internal combustion engines to electric vehicles is still very, very far away.

So, the next time you are engaged in a spirited debate with a diehard EV fan who insists that the days of the muscle car are numbered – remind him or her that the entire segment sells less vehicles than the Ford Mustang.

Mike wrote on February 16, 2016 - 10:06pm Permalink
My first car was a GT Mustang and I loved it. My most recent car was a Chevy Volt and I loved it for some different reasons. But one shared characteristic of both cars was awesome torque. I will grant you that the noise levels are decidedly different, but overall it's unclear why the author is picking a fight with the EV segment. My only thought would be that the Toyota Prius - the antithesis of an American muscle car - handily outsold the Mustang from 2007-2014. He is also conveniently disregarding the artificially low price of gasoline we have been seeing for the past 18 months or so which, while I don't mind paying less to fill up, is a direct correlation to the inversion of the sales trend between muscle cars and EVs/hybrids over the last decade. I guess my main point is: way to cherry pick data for a flashy headline!
Leo Kerr wrote on February 17, 2016 - 4:53am Permalink
What you didn't mention Patrick was that Tesla Model S outsold all the luxury cars in the market in 2015 and they were the only luxury car to increase sales - all the others went backwards. Yes, Mercedes, Porsche, Lexus, BMW - Tesla is the number 1 in luxury sales. If you consider the Model S has only been around for 3 years, with no advertising, no dealership infrastructure, no long term branding etc. I think your premise is a little bit misleading. Sure the Mustang may have outsold all EVs (I'm not sure of the data) but when a compelling mass market EV is released with no range anxiety and lower pricing, the situation my friend will change quite quickly, just as it has in the luxury sales department. Oh and your muscle car has nowhere near the performance of a Model S. The change is not as "far away as ever" as you suggest. Let's see what happens over the next 5 years with affordable long range EVs coming on to the market. Hey don't get me wrong, the internal combustion engine has a few years left but the superior performance and technology of EVs will simply prove compelling in the marketplace. The stone age didn't stop because there were no stones available - it was displaced by superior technology. Dream on.
Brian Keez wrote on February 17, 2016 - 7:09am Permalink
As a diehard EV fan, I must point out that there are no EV's that go head-to-head with muscle cars. EV's are not nearly as widely available nor is the level of consumer education between the two cars even comparible. When there is a Mustang EV sold along side an ICE Mustang, the loud, clanky one would be discontinued. I would buy a 2016 Mustang EV quickly, it's a great looking car! A mustang EV would cost $.03 - .05 per mile to operate, no oil changes, no transmission, the list goes on. Performance - an EV mustang would have better weight distribution than the ICE version and lower center of gravity (battery under the floor) so would handle much, much better. 0-60 times would be easily under 5 seconds for the entry level model and the AWD, dual motor model would be high 2 to mid 3 seconds. So there it is, when there is a head-to-head, EV's will dominate. My question is; why not build that EV?