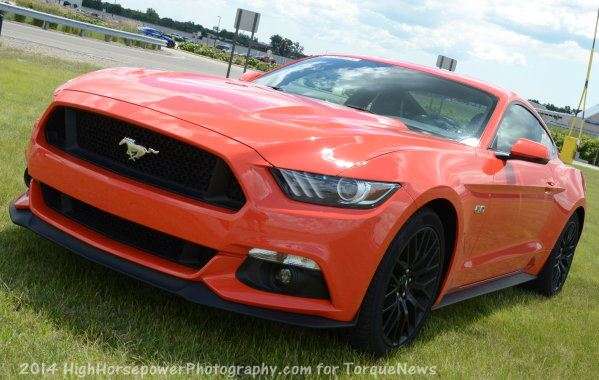 We knew that the arrival of the 2015 Ford Mustang would lead to a big sales spike for the original pony car and with the next generation reaching a great many dealerships around the country in November, Ford sold enough Mustangs last month to beat both the Chevrolet Camaro and the Dodge Challenger – combined.
Advertisement

Over the course of the 2014 calendar year, the Chevrolet Camaro has handed both the Ford Mustang and the Dodge Challenger a series of monthly sales beatings that will almost certainly lead to GM claiming the title of the bestselling sports car in America for the 5th straight year. This domination of the market by the Camaro is unprecedented and with the introduction of the new 2015 Mustang, Ford had hoped to put an end to the Camaro’s streak of annual sales titles. The arrival of the 2015 Mustang will not only bring about a big spike in sales thanks to the new models, but the new models will cause deep discounts on the “old” 2014 models, which will account for a spike in sales in those previous generation cars sitting on lots around the country.

Well, November was the first month where the vast majority of Ford dealerships around the country took delivery of their first batch of 2015 Mustang coupes and, as expected, that came with a big spike in sales. This spike was big enough to make November 2014 the best November for the Mustang since 2006 and not only did the Mustang outsell the Camaro and the Challenger, but Ford sold more Mustangs than the other two companies sold muscle cars combined.

The 2015 Ford Mustang Crushes the Competition
The 2015 Ford Mustang has a front end design that is less than loved by some Mustang traditionalists, but that hasn’t slowed down the stream of interest in the next generation pony car. The first units of the S550 Mustang began reaching dealerships in October, but the first major wave of new Mustangs arrived around the country in November. That first major wave helped Ford sell 8,728 example of the Mustang, including both 2014 models already sitting on lots around the country (which will soon be subject to big discounts) and 2015 models that are arriving every day.

As mentioned above, 8,728 Ford Mustangs sold in November allows Ford to outsell the Chevrolet Camaro at 4,385 units and the Dodge Challenger at 4,157. Together, Chevrolet and Dodge sold 8,542 muscle cars – 186 fewer cars than Ford sold Mustangs. It should be noted that while November was the third best month of 2014 for the Mustang, it was also the worst month of the year for the Camaro while also being one of the worst months since the 5th gen Camaro was introduced for the 2010 model year.
The Mustang hits record highs while the Camaro hits record lows and that amounts to the most lopsided monthly sales advantage that we have seen in years.

Camaro Still Has a Huge Lead
Unfortunately for Ford and fortunately for General Motors, the Camaro has sold so well this year that it built a massive lead before the 2015 Mustang was introduced. Even with the huge advantage for the Mustang in November, the Camaro still leads the annual sales race by more than 6,500 units. This means that if Ford manages to sell 10,000 Mustangs in December, the Camaro would have to post one of its worst sales months of all time for the Mustang to win the 2014 sales race. If Ford posts similar Mustang sales numbers in December, Chevy would have to sell less than 2,200 Camaros to let the 5th straight muscle car segment sales title slip away.

MRK wrote on December 3, 2014 - 7:17pm Permalink
Wonder if its people rushing to buy the 2014's before they are gone ? I drove all 4 Camaro,14/15 Mustang and Challenger and I like the Challenger the best..Camro/Mustang are probably good for Women and small men,being over 6 feet tall the Challenger has the best room and feel,but even my midget small 5'4 wife she also loved the Challenger..best ride,look,handling (sure maybe if you are on a small tight track it isn't as good because its bigger as they say ?) anyways,we traded our 2007 Mustang GT for a new 2015 Challenger R/T Classic,the 5.7 HEMI 8 speed auto runds 4.8 0-60 so far,pretty good !! Sound,looks,we love it...
Patrick Rall wrote on December 4, 2014 - 6:29pm Permalink
I spoke with a Ford rep yesterday and found out that only about 10% of Mustang sales last month were 2014 models. I was surprised that the number wasnt higher, but that makes it clear that it is people buying the 2015s for full price more than the 2014s with big discounts.
David wrote on December 15, 2014 - 8:20am Permalink
Shipping them and selling them is two different things. The local Ford dealer got a White 4cyl. and a Red 5.0 on November 11, both are still on the lot 33 days later.
Dan Slover wrote on December 5, 2014 - 11:17am Permalink
I agree with your assessment of the 2015 Challenger RT Hemi. I purchased one at the end of October and am completely satisfied. Dodge hit a home run with the interior cabin updates on the 2015 model. My youngest son is 6' tall and had no problem sitting in the back seat of the Challenger. I also like to haul my golf clubs around so ample trunk space was key. Nice Work Dodge!
Doug White wrote on December 4, 2014 - 10:25am Permalink
I'm 6'2, I have no trouble sitting in my Premium GT with Brembo package, 2014 Mustang. It's quite comfy, and handles the turns in a fantastic fashion.
Michael See wrote on December 4, 2014 - 12:52pm Permalink
Yes, Ford will probably miss the '14 sales crown for Mustang but, with global sales in 2015 - I am sure they will do more than catch up.
Majed Almehmadi wrote on December 5, 2014 - 1:55pm Permalink
That's why I bought the 15 Challenger SRT 392. Best muscle car look, interior, and roomwise. Plus it's not as popular as the a mustang so it's good to be diffident.
edco wrote on January 2, 2015 - 4:29pm Permalink
In STL, MO there are no 2014 Mustangs left. There are four 2014 GTs within a 250 mile circle. The prices range from $33K to $37K. I do not think these searches are reliable. In one case the list the dealer 1 mile from my home and that car is NOT there. That is the Autitrader.com search results. Craigslist/STL, MO/2014 (New) Mustang-search results=0. Ford.com has removed 2014 Mustang from the web site. I do not believe the stang sales are incentive heavy 2014s. They disappeared in September. I wanted a track pack 2014 V6. In September there was one within a 500 mile radius, in Jacksonville, ILL. They wanted $32K. I liked the car but not the deal and passed. For $32K I can buy a loaded 2015 V6. My number was under $26K. Big difference! Anybody thinking the were giving the 2014s away were not trying to buy one. Yes there was $4k or $3.5K factory incentive, but the discounts were based upon a fixed non-negotiable price. The fixed non-negotiable price sucks. In the end you were making the same deal you would have gotten a year past.