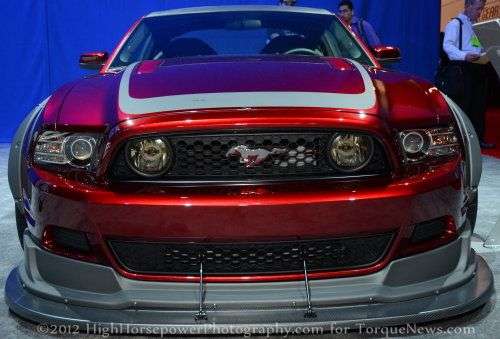 The Scion FR-S was clearly one of the most popular models at the 2012 SEMA Show, with the SEMA organizers naming it the Hottest Sport Compact of the event but with more examples throughout the show than any other models – the Ford Mustang was named Hottest Car and the Ford F Series was named Hottest Truck.
Advertisement

The night before the 2012 SEMA Show officially opened to the masses, show organizers walked the floor and took a tally of the number of vehicles on hand with the results finding that the most commonly chosen car was the Ford Mustang while the most popular truck was the Ford F Series. While the Mustang likely had some competition from the likes of the Chevrolet Camaro and the new Scion FR-S, the Ford F Series seems to be stationed in every other booth as you walk the many isles of the SEMA Show. This is the third year in a row that the F Series has won while the Mustang crew is proud to hoist their first “Hottest Car” award.

“We’re pleased and proud SEMA members agree with what our customers have been saying – that Ford Mustang and F-Series are the industry’s hottest car and truck respectively,” said Ken Czubay, Ford vice president, U.S. Marketing, Sales and Service.

The Hottest Car and Hottest Truck awards were first introduced in 2010 so for the Ford F Series – it has not gone a year without losing during the brief history of the award. On the other hand, the Ford Mustang claims its first title after watching the Chevrolet Camaro take the title each of the past two years.

Each year, the Ford Mustang and the Chevrolet Camaro are the clear favorites for both the OEM displays as well as the many smaller booths devoted to aftermarket providers. This was clearly illustrated into the Chevrolet Performance and Ford Motor Company displays where a great many Camaros and Mustangs were featured but when you walk among the hundreds (if not thousands) of vendors – you see a great many more of these popular American muscle cars tucked into the smaller booths.

We can expect to see the Ford Mustang and Chevrolet Camaro continue to be the most popular cars among those building show cars for SEMA in the future but GM and Ford should keep a close eye on the Scion FR-S. The FR-S was incredibly plentiful throughout the 2012 SEMA Show and having seen so many – I was left wondering if any of the rear drive Scion sports cars weren’t on display at SEMA. Considering the instant popularity of the Scion FR-S and the quick response by the aftermarket community to offer go-fast parts for this affordable new rear wheel drive sports coupe – Ford and Chevy could be feeling the heat from the FR-S in the future.

Luckily for the American muscle cars, the Hottest Compact may be as far as the FR-S gets…only time will tell. At the end of the day, there will likely always be more companies in attendance at SEMA that offer products for the Mustang and Camaro than there are companies who offer high performance parts for the Scion FR-S – a fact which should give the mighty Mustang a leg up for years to come. There is also the fact that a lightly modified Mustang makes 600 horsepower while a lightly modified FR-S is fortunate to make half that.