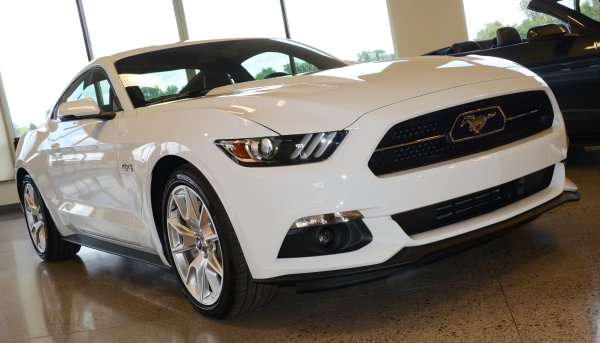 The Ford Mustang gets a Huge Price in India

The 2015 Ford Mustang is headed to India with a factory right hand drive layout for the first time and while this new Mustang will be less expensive at the local Ford dealerships than it was through importers – it is still more expensive in India than in the other foreign countries getting a new Mustang for the first time.
Advertisement

The 2015 Ford Mustang was designed to be sold all over the world, making it the first time that Ford has marketed their proud pony car outside of North America. This is good news for Americans living abroad and foreign fans of American cars living in their own homeland, but as it the case when buying a German sports car in the US – buying the all-American pony car overseas comes with varying levels of price hikes.

Pricing in Europe and China
Over the past six months, we have looked at 2015 Mustang pricing at Ford dealerships in Germany, Great Britain and China. In Germany, the base EcoBoost Mustang costs 34,000 Euros ($38,000 USD) while that same pony car in Great Britain will cost 28,995 GBP ($43,000). China previously had the highest markup we have seen thus far with a price starting at 399,800 RMB ($65,000 USD) for the EcoBoost model.

That is a whole lot of money to pay for a 2015 Ford Mustang EcoBoost that only costs around $25,000 in the US, but in addition to the higher cost of getting the cars to these other locations, China has high import taxes on vehicles made outside of the country. Most countries have these type of import taxes, but they are particularly high in China – or so we thought. It turns out that in India, those import fees are even higher, with the base Mustang expected to cost the local equivalent of $80,000 USD.

The First Mustang in India
The 2015 Ford Mustang is the first ever to be built with a right hand drive configuration and India is one of the key markets expected to buy up those models. The Mustang has been available through grey market importers in the past, but that is very expensive and not everyone wants a left hand drive vehicle in a country where right drive is the norm.

The 2015 Mustang will be built and shipped to India, which means that it will have huge taxes attached to the price, resulting in an estimated MSRP of 5 million Indian Rupees. 5 million Rupees might sound like a lot of money - and it is – although not as high as an American reader might guess. 5 million Indian Rupees converts to around $80,000 and while we aren’t sure which engine you will get for that price, Indian buyers will be paying a serious markup.

The cause for confusion as to which engine is included for that $80k Indian price is that all of the Indian automotive outlets have stated that the 2015 Ford Mustang will be offered in India with the same three engines as the American models. For every other market that we have discussed thus far, the 3.7L V6 was not offered, but if those reports are correct, the US and India could share the same base model engine. Regardless of which engine Indian buyers get, they will be paying more than three times as much as American buyers for the 2015 Mustang that starts around $25k. However, those deep pocketed buyers who want to show off their American muscle car will finally be able to do so with the simplicity of their local dealership.

Right now, the 2015 Ford Mustang isn’t listed on the Indian Ford website, but when it does arrive on that site, we will bring you more detailed information.