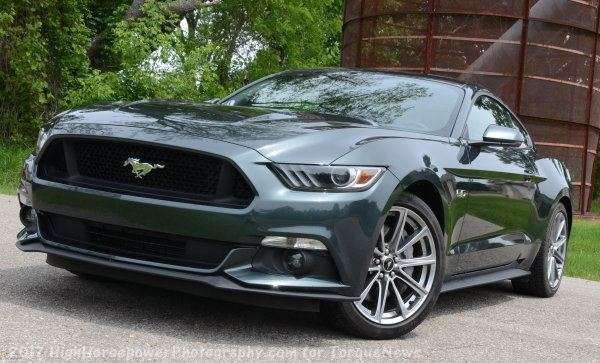 The sales numbers from around the muscle car world for February 2017 are in and once again, the Ford Mustang claimed the monthly sales race, but the bigger surprise is that the Dodge Challenger outsold the Chevrolet Camaro by a comfortable margin.
Advertisement

February was a good month for the muscle car segment, climbing by more than 50% compared to January, but as has been the case in most months over the past two years, the Ford Mustang led the segment in sales. Since January 2015, the Mustang has led the muscle car segment in monthly sales 24 times in 26 months, so it doesn’t come as much of a surprise that Ford once again sold the most 2-door sporty cars in February – but it comes as a big surprise that the Dodge Challenger outsold the Chevrolet Camaro by a big margin.

Mustang Leads in February
In February 2017, Ford Motor Company sold 8,298 examples of the Mustang in the United States. That is a decline from the 9,993 Mustangs sold last February, but it is quite a bit higher than the 5,046 Mustangs sold in January 2017, so the sporty Ford is on the right track as we head into spring.

The Challenger Jumps into Second
The big surprise for the February 2017 muscle car sales race is that the Dodge Challenger beat the Chevrolet Camaro to claim second spot, and the big Mopar muscle beat the Chevy by a significant margin. FCA sold 6,107 Challengers in February – up 19% over last February - while Chevrolet sold only 4,658 Camaros. January 2017 was the worst sales month for the modern Chevrolet Camaro and other than this January, we have to go back to November 2014 to find a worst month than February. As a result, the Challenger was able to leap into the 2nd spot for the month and the year.

2017 Muscle Car Sales Race
On the year, the Ford Mustang has moved 13,344 units, making it the bestselling car in the segment by a comfortable margin just two months into the year. The Dodge Challenger is second with 9,500 units and the Chevrolet Camaro is 3rd with 8,246 units sold thus far. All three cars are down compared to the same months last year, but the Mustang continues to storm ahead while the Challenger and Camaro battle for second – again.

It is far too early in the calendar year to say that any of these three cars has a direct line to the annual title, but with the Ford Mustang continuing the same dominance in the muscle car segment which has allowed it to claim the last two years – it appears that the Motor Company could be on its way to another title.

It should be noted that Chevrolet will almost certainly see a spike in sales with the arrival of the new ZL1 and ZL1 1LE later this year. The ZL1 sales should help the Camaro climb back into the 2nd position as the year goes on, but it seems unlikely that Chevrolet is going to knock Ford off without some major moves to increase Camaro sales.