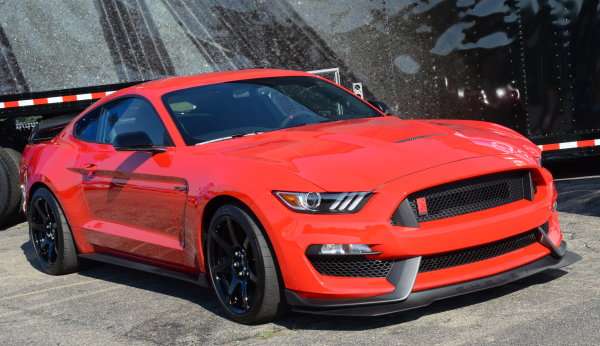 For the second year in a row, the Ford Mustang has beaten the Chevrolet Camaro and the Dodge Challenger to claim the title of America’s bestselling muscle car for 2016 – grabbing 10 of the 12 monthly sales wins along the way.
Advertisement

The Ford Mustang dominated the 2015 muscle car sales race and while we expected to see a closer battle in 2016 with the arrival of the 6th generation Chevrolet Camaro, the Mustang still pummeled both of the cross-town rivals this year. The Chevrolet Camaro did win two of the monthly sales battles during the year – claiming September and October – but with the Mustang finishing off the year with back to back monthly wins along with a few 12k+ months early in the year, the Ford Mustang is once again the bestselling muscle car in the USA.

Mustang Closes 2016 with a Win
While the Ford Mustang didn’t win every monthly muscle car sales race in 2016 like it did back in 2015, the mighty Mustang closed 2016 with a big win in December. After the Mustang posted its worst sales of the new generation in September, October and November, the original pony car rebounded to move 7,064 units in December – beating the Camaro by 64 units. As a result, the Mustang won 10 of the 12 months during 2016 and that led to a second straight annual muscle car sales title.

Camaro Finishes Strong
Like the Mustang, the Chevrolet Camaro had a rough few months leading up to December, but in the final month of 2016, the Camaro moved 7,000 units – making December the 2nd-best month for Chevrolet muscle car sales on the year.

Challenger Also Finishes Up
The Dodge Challenger also slumped through the fall, but like the Mustang and Camaro – the Mopar muscle car posted strong sales numbers in December 2016. With 5,257 units sold, it wasn’t a great month for the Challenger, but it is towards the top half the chart for the year.

Mustang Claims 2016
While all three American muscle cars posted strong sales in December 2016, neither the Camaro nor the Challenger had any chance of catching the Mustang in the race for the annual sales title. Ford came into the final month of the year with a lead of some 35,000 units, so the Mustang was guaranteed to win the title for the 2nd straight year, but with the official numbers coming in from around the industry – it is official. The Ford Mustang is the bestselling muscle car in America for 2016.

On the year, Ford sold 105,932 Mustangs while the 2nd place Camaro moved just 72,705 units and the 3rd place Challenger moved 64,478 units –leading to a total of 243,115 muscle cars sold during 2016. That is down sharply from 2015 when 266,216 muscle cars were sold, but 2015 sales were boosted by big sales spikes around the arrival of the then-new Mustang and Challenger. As Mustang and Challenger sales cooled down while the new Camaro failed to see the huge sales spike, the segment as a whole dropped by about 10%.

So, congratulations to Ford Motor Company for offering America’s bestselling muscle car for the second year in a row.

April wrote on January 5, 2017 - 10:02pm Permalink
Congrads to Mustang. The 2015-2017 Mustang will be known for eternity as the 2 door Ford Fusion Mustang. There was the fox bodies that were awesome.There was the 1994 to 2014 rental car fleet Mustangs. And of course the 1974 to 1978 Mustang 2 cars. The real Mustangs from Mustang lovers will always be 64.5 to 1973. Lets hope the refresh in 2018 will bring back a new front end. Thank goodness the people at Ford will put a hybrid next gen. It may help get rid of the stigma of no original Mustangs since fox bodies. The one thing Ford did right was the Eco boost Mustang. Fast an can be tuned to be close to the V8 for a fraction of the price. By the way Chevrolet didn't do to good when they put the v6 above the turbo Camaro. To be honest the v6 Camaro is as bland as can be. It doesn't kick in to 4500 and by then your above 60. No fun at all. Just like the Mustang the Camaro turbo has easy ways to make loads of power for cheap. Plus us under 30 love the sound of both turbos from Ford And Chevy
Jack wrote on April 24, 2017 - 5:12am Permalink
Hater be like "most Mustangs sale are Ecoboost"
Mark wrote on September 17, 2017 - 4:13pm Permalink
I've been in all 3 and the Challenger and charger are by far the highest quality made cars out of the 3. And if you ad the sales of the Charger to this, it by far puts the Dodge in the top spot for sales. It is a Muscle car too.