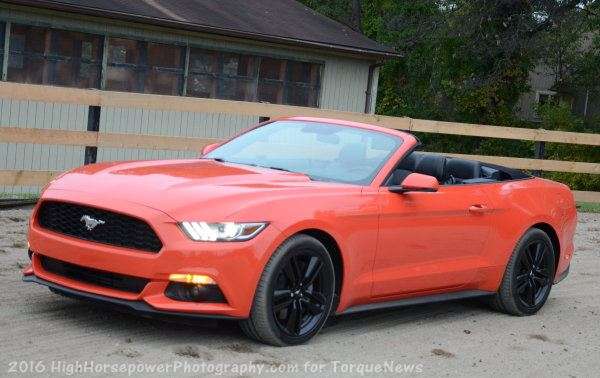 For the 4th time this year and the 18th consecutive month, the Ford Mustang has outsold the Chevrolet Camaro and the Dodge Challenger, making the Mustang the bestselling sporty car in America as the new model continues its domination of the global performance car sales.
Advertisement

I am beginning to sound like a broken record, but with the Ford Mustang beating the Chevrolet Camaro and the Dodge Challenger in April 2016 sales, the Mustang has now beaten the cross town rivals (and every other sporty car sold in America) for 18 straight months. The all-new 2015 Ford Mustang first reached dealerships in November 2014 and since them, no other 2-door car in America has outsold the newest Ford pony car. Even with the arrival of the new Chevrolet Camaro, the Mustang’s domination of the segment is barely affected as the Motor Company looks at a second straight muscle car sales title.

Mustang’s Big April Numbers
In April 2016, Ford sold 12,726 examples of the Mustang in the United States while Chevrolet sold just 7,457 examples of the Camaro and Dodge sold just 6,412 examples of the Challenger. Mustang sales are down slightly compared to the same month last year, but with more than 12,000 units sold for just the 5th time in the 5 years that I’ve been covering muscle car sales – all of which came since the 2015 Mustang was introduced.

On the year, Ford has now sold 42,862 examples of the 2015 and 2016 Mustang and while this is down slightly from the 42,995 Mustangs sold in the first 4 months of 2015, this is still a remarkable number of performance cars to sell for a car that is now well beyond the “honeymoon stage”. At this point, Mustang sales aren’t high because of the rush to get a hot, new version – it is just a steady rush to get a car that has proven to be a smashing success.

Early on in the life cycle of the new Ford Mustang, critics insisted that the high sales numbers were due to the rush for the new models and those folks insisted that once the early rush faded, sales numbers would drop back down to where they have been in the past few years – typically well below 8,000 units per month. However, after 18 months of 2015-2016 Mustang sales, the numbers have remained very high, with the worst month coming in February 2016, when “only” 8,454 Mustangs were sold.

Those critics who insisted that the Ford Mustang sales would slump when the magic of the new model wore off also insisted that when the new Chevrolet Camaro arrived for the 2016 model year, it would see similar big sales numbers while also cutting into Mustang numbers. After 6 months of new Camaro sales, the new Chevy muscle car still hasn’t seen the big spike – nor has there been much cut into the Mustang’s sales numbers.

Camaro Grows a Little in April
General Motors sold 7,457 examples of the Chevrolet Camaro in April 2016, beating the Dodge Challenger by over a thousand units, but trailing the Mustang by more than 5,200 units. April is the best month for the new Camaro, but the best month for the new Camaro is right around a thousand units less than the new Mustang’s worst month. In short, the Camaro has not seen the spike in sales from the new model, with sales numbers of the 2016 model trailing many of the monthly sales numbers from the 2014 and 2015 calendar years – when only the “old” models were available.

I have driven and loved the new V6 Camaro Convertible and it blows my mind that we aren’t seeing greater Camaro sales numbers, so I am without a real explanation as to why we aren’t seeing more new Camaros sold each month.

It wasn’t the best month for the Dodge Challenger, but it was one of the best.

LG's New EV Battery Plant Is a Welcome News for Tesla
Tesla Giga Berlin's New Hurdle: It's Not Only the Gov't, but Now Tesla Itself
END_OF_DOCUMENT_TOKEN_TO_BE_REPLACED