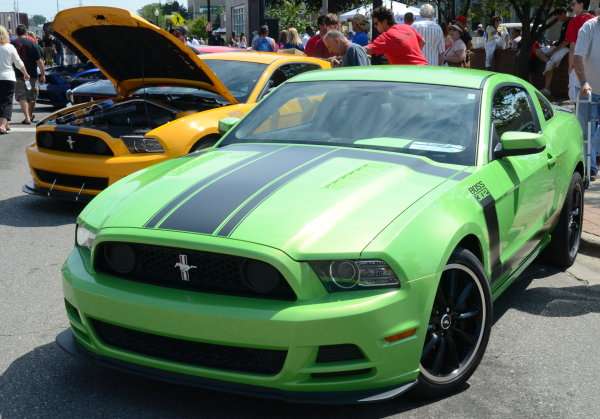 Ford Motor Company issued an interesting statement today, detailing the color preferences of Ford Mustang buyers over the last 50 years – highlighting the most popular colors for almost every model year along with showing the basic breakdown by color “range” from the first generation Mustang to today.
Advertisement

First, we should begin by pointing out that the new release on the Ford Mustang color preferences over the past 50 years is actually only based on production of the Mustang since 1967 and not 1964 but it still paints an interesting picture as to the buying trends of American performance car buyers over the past five decades. I am guessing that when the folks from the Marti Auto Works put this information together for Ford Motor Company, the breakdown for the first three model years (1964, 1965 and 1966) were somehow not available but if I had to guess, I would surmise that those folks who bought Mustangs in those first three years probably followed very similar buying trends to those who purchased the Mustang in 1976 through 1973.

During the first generation of the Ford Mustang (1867 through 1973 in this report), either blue or green was the most chosen color each year with reds being a popular third choice in the early portion of that time while yellows replaced reds as the third most popular in the latter half of the first generation. Brown also snuck onto the list in third for 1973 with yellow finishing second as green was ousted from the top three.

During the Mustang II generation that ran from 1974 through 1978, buyers shifted their buying trends wildly as brown crept onto the list more frequently and towards the end of this generation, white became the top choice over blue. Green and red only appeared on the list of the most popular colors one time each during the run of the Mustang II.

With the introduction of the new SN95 Ford Mustang for the 1994 model year, red would continue to be the dominant color choice with green coming in second but it joining the list for the first time ever was black. Red would be the top choice for the first seven model years of the SN95 Mustang with black and green battling it out for second and third but when green fell off of the list in 1999 with the introduction of the SN95 New Edge Mustang, silver would take the place of green as the third most popular color behind red and black. During the six model years of the New Edge Mustang, red, black and silver were the most popular colors five times.

The popularity of red, black and silver for the Ford Mustang would continue into the S197 generation when it was introduced for the 2005 model year and through the 2009 model year, those three colors would jockey for the top three spots with each of them taking a turn in each of the top three spots. In 2010, blue would pop onto the top three list for the first time since 1991 and it did so as the most popular color ahead of red and black but for 2011, it was back to black, red and silver. 2012 saw blue bump silver back off of the list and for the 2013 model year, black and red were joined by white for the first time since 1999.

The most prominent figure pertaining to the colors of the Ford Mustang over the past 50 years is the overall breakdown by color range…meaning that all of the reds were grouped together, all of the blues were grouped together, all of the greens were grouped together and so on. With this classification system, red has proven to be comfortably the most popular Ford Mustang color of all time with a whopping 21% of all Mustang buyers since 1967 opting for some shade of red. Blues were the second most popular colors with 17% and silver came in third with 14% of Mustangs finished in that color – although silver didnt show up on the list of the most popular colors until the Fox Body era in the late 1970s and after a strong run through the mid 1980s, silver disappeared from the list until 2000. Since 2000, there have only been two model years where silver was not one of the top three most popular Mustang colors.

After silver, white is the next most popular color range at 13% while black is next in line with 12% and even though black never appeared in the top three Mustang color options until 1994, it is not been out of the top three since then. The most popular color ranges are finished off with greens ranking 6th at 10%, brown ranking 7th at 7% and yellows have proven to be the least popular option of the normal production colors with just 6% of Mustangs painted one of the various yellow shades over the years.
We have attached the entire infographic below for those who want to see the breakdown of color preferences for the Ford Mustang year by year since 1967.